What are Quaaludes and Why Were They Banned?

Quaalude is the trade name for methaqualone. In 1965, William H. Rorer Pharmaceuticals introduced it to the medical community as a safe barbiturate substitute to induce sleep. It was later shown to have addiction and withdrawal symptoms similar to other prescription barbiturates.

In 1972, plenty of US doctors prescribed Quaaludes. Methaqualone was sold in capsule form or in tablet form that had a “714” imprint. They were inexpensive during the time they were legal in the United States. Quaaludes are no longer legally available in America for the last 36 years. It is now an illegal drug that goes by names like Mandies and Quack.

What are Quaaludes made of?

The main ingredient of Quaaludes is a synthetic chemical called Methaqualone. Indian researchers in 1955 formulated it in their pursuit of new antimalarials. The drug has sedative quality, but it was then thought to be non-addictive. Quaaludes were unique in that they were both a depressant and a hypnotic. 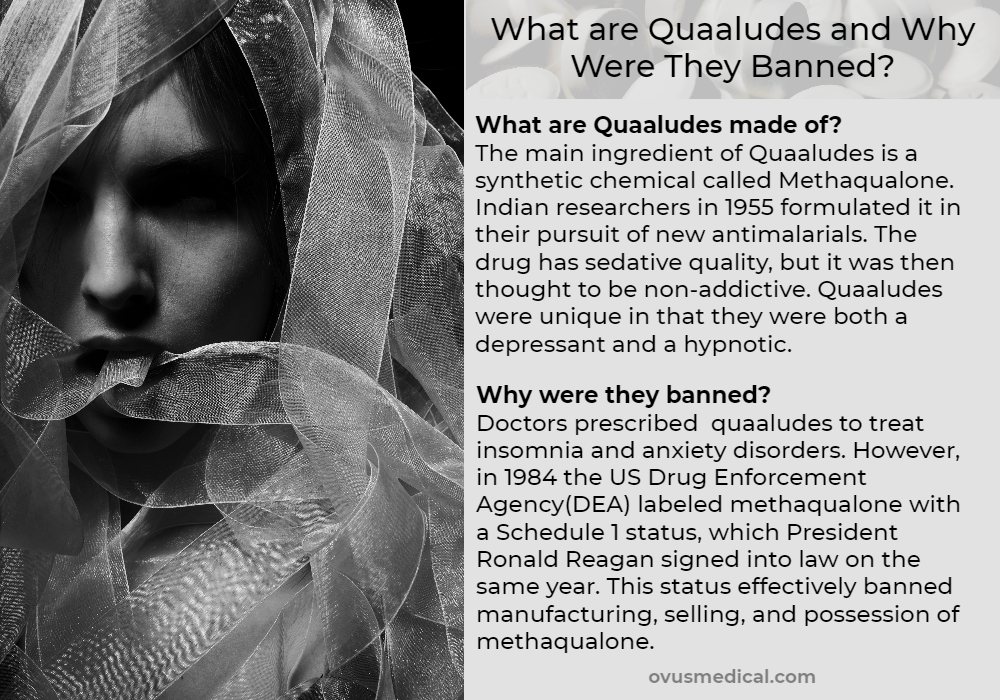 How do Quaaludes work?

Most sedatives, including alcohol and Valium, work by binding to gamma-aminobutyric acid receptors (GABAA) in the central nervous system, increasing the brain’s inhibitory signals. Quaaludes bind to a different segment of the GABAA receptor but have similar sedative effects. When GABA (neurotransmitter) receptors activity increases, your breathing and heart rate decrease. Whenever this happens, your pulse rate and blood pressure drop, too, entering a feeling of deep relaxation.

Methaqualone was both a sedative and a hypnotic. It promotes relaxation, sleepiness, and sometimes a feeling of euphoria (happiness, calmness). They are Central Nervous System(CNS) depressants that include sedatives, tranquilizers, and hypnotics.

Why were they banned?

Doctors prescribed quaaludes to treat insomnia and anxiety disorders. However, in 1984 the US Drug Enforcement Agency(DEA) labeled methaqualone with a Schedule 1 status, which President Ronald Reagan signed into law on the same year. This status effectively banned manufacturing, selling, and possession of methaqualone.

By the late 1960s and 1970s, the drug became a popular recreation or party drug. At its height during the 1970s, Quaalude was the “disco biscuits” found across the US.

Quaaludes’ abuse potential soon became apparent. In 1973 the Controlled Substances Act labeled methaqualone in Schedule II. Schedule II status makes it difficult to prescribe, and it is illegal to possess without a prescription. But then the “stress clinics” that appeared across America became the easy source of prescriptions for Quaaludes.

Lemmon Pharmaceuticals, which bought the Quaaludes recipe in 1980, stopped the production of Quaaludes in 1983 due to widespread abuse, hundreds of deaths from illegal use, illegal recreational use, and resulting bad publicity. User demand for quaaludes waned, but new drugs just replaced quaaludes in the recreational niche.

Why do Substance Abusers still use them despite the consequences?

Why continue using this substance despite the severe negative consequences?

A Quora writer who describes himself to be a part of the secret society of drug takers says this:” “The relaxation effect was so complete that the couch and your body were melding into one. It was ok because it felt so good to be totally relaxed.”

But why would you want to start using or continue using the outlawed Quaaludes after watching the 2013 movie The Wolf of Wall Street?

Drug addiction robs a user of any rational thinking. Studies on brain imaging on patients addicted to drugs show physical changes in the brain that are critical for judgment, decision-making, learning, memory, and behavior control.

Scientists believe these changes alter how the brain works and explain why substance abusers still use drugs despite negative consequences. Additionally, substance abuse impairs a person’s ability to refrain from continued use of drugs.

Substance abuse is a disease and a social menace that is depriving nations of precious human resources. It will require social support and material resources to help those who struggle with addiction and see a chance to live meaningful alternative lives.

If you want to learn more about drugs and drug testing, visit the Ovus Medical Blog. We have a wealth of information you can benefit from.