What Is Kratom and Does It Show Up When Drug Testing? 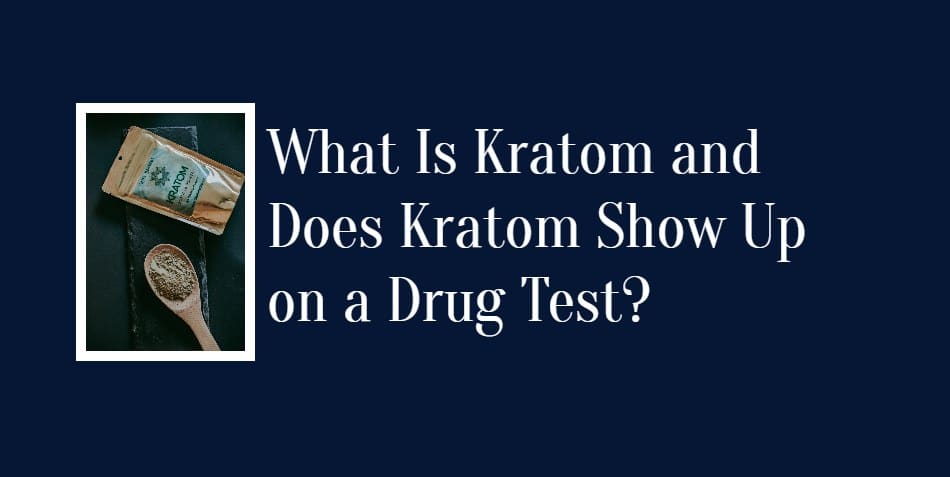 What Is Kratom and Does It Show Up When Drug Testing?

You can buy a drug online and in health stores that is addictive, dangerous, and even more potent than morphine. It’s legal in most states and attempts to regulate it have failed. That drug is Kratom.

Kratom is a relative newcomer to the drug market in the US, and you may have questions about it.

How popular is it? Where is it from? Does Kratom show up on a drug test?

Kratom advocates claim it can cure opiate addiction, improve your mood, and naturally treat pain. However, the FDA and medical professionals say it’s addictive and has no proven benefits.

If you’re wondering whether you need to be concerned about Kratom, this article will answer all of your questions. So read on!

Kratom is a tree that grows in several Southeast Asian countries. Its scientific name is mitragyna speciosa. In Malaysia, Thailand, and Indonesia, people consume Kratom as an herbal remedy.

The traditional method of consumption is to chew on the tree’s leaves, which produces a mild stimulant effect. Sometimes the leaves are also brewed into tea. In its native area, users prize Kratom for its supposed pain-relieving properties.

In recent years, Kratom has become somewhat popular in the US market. Kratom products in the US are most often made with dried, ground leaves, often packaged as pills or capsules. 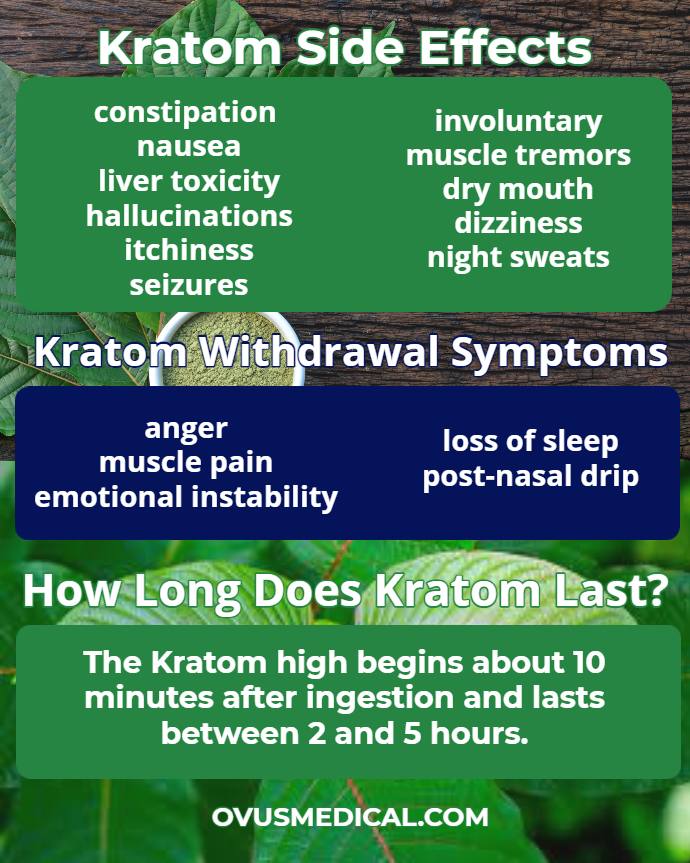 You can find Kratom products online or at many health food stores. Taken in small doses, it can act as a substitute for coffee or other caffeinated products.

Kratom is also marketed as a natural remedy for a wide variety of ailments. Kratom users believe the drug can suppress appetite, soothe muscle aches, and cure stomach problems like diarrhea and cramps. Sometimes Kratom products claim to be a treatment for panic attacks.

Some users also prize Kratom for its recreational effects. It can produce feelings of euphoria and well-being. Kratom is a popular “legal high.”

One of Kratom’s most popular applications is as a substitute for opiates. Although research on Kratom is scant, scientists believe it binds to the opiate receptors on the brain.

This opiate effect is why Kratom causes a sedative and euphoric feeling when taken in large doses. Practitioners of traditional Chinese medicine believe Kratom is a substitute for opium.

Since Kratom is a natural product from a tree, some people think of it as a safer alternative to synthetic opiates like fentanyl and heroin. Some users report that Kratom helps reduce cravings for other opiate drugs.

Advocates say that Kratom can be used in opiate replacement therapy instead of methadone or naloxone. In their reasoning, Kratom soothes symptoms while users detox from harder drugs.

The truth is more complicated and discouraging. Research shows that Kratom isn’t as safe as its fans claim and that it may be addictive itself. Medical professionals consider Kratom to be neither safe nor effective as a treatment for opiate addiction.

Contrary to its reputation as a safe herbal remedy, heavy Kratom consumption comes with many side effects. The most commonly reported adverse effects of Kratom are constipation and nausea.

Other commonly reported symptoms are:

Like other psychotropic drugs, Kratom’s use can impair judgment and the ability to drive or operate machinery. Kratom can pass from a mother to an infant during breastfeeding. Kratom can have adverse reactions to prescription drugs, leading to abnormal behavior.

In addition to those side effects, Kratom has also caused dozens of deaths in the US. Between 2011 and 2017, 1800 calls to Poison Control were linked to Kratom use. 44 Kratom-related deaths occurred in the same period.

Most of the deaths associated with Kratom resulted from mixing it with other psychotropic drugs. Reports mentioned co-toxicity with fentanyl, benzodiazepines, cocaine, and antihistamines. Kratom use alone accounted for at least two deaths.

More research is necessary to determine whether it is possible to overdose on pure, unadulterated Kratom. The Kratom available in the US market is often mixed with toxic or dangerous chemicals that are not listed on the label.

One of the most severe contaminants in Kratom products is salmonella bacteria. In 2018, 130 US residents reported salmonella poisoning from Kratom, and 35 people died. Unfortunately, salmonella is odorless and invisible, so there’s no easy way to determine if your Kratom is contaminated.

Kratom users who quit the drug report showing symptoms of physical withdrawal. These can include:

Babies born to mothers who use Kratom also exhibit withdrawal symptoms. This suggests that Kratom can be passed to unborn children via the umbilical cord.

Kratom and the Law

Kratom is currently unregulated at the federal level in the US. The Food and Drug Administration proposed banning Kratom in 2016 but withdrew the proposal after public outcry.

The FDA still lists Kratom as a substance of concern and states that it has not been proven safe or effective for any medicinal use. Six US states have banned Kratom outright, and its use is restricted in several other states and municipalities.

Kratom’s status as an unregulated supplement means that the government does not test kratom products for safety and purity. 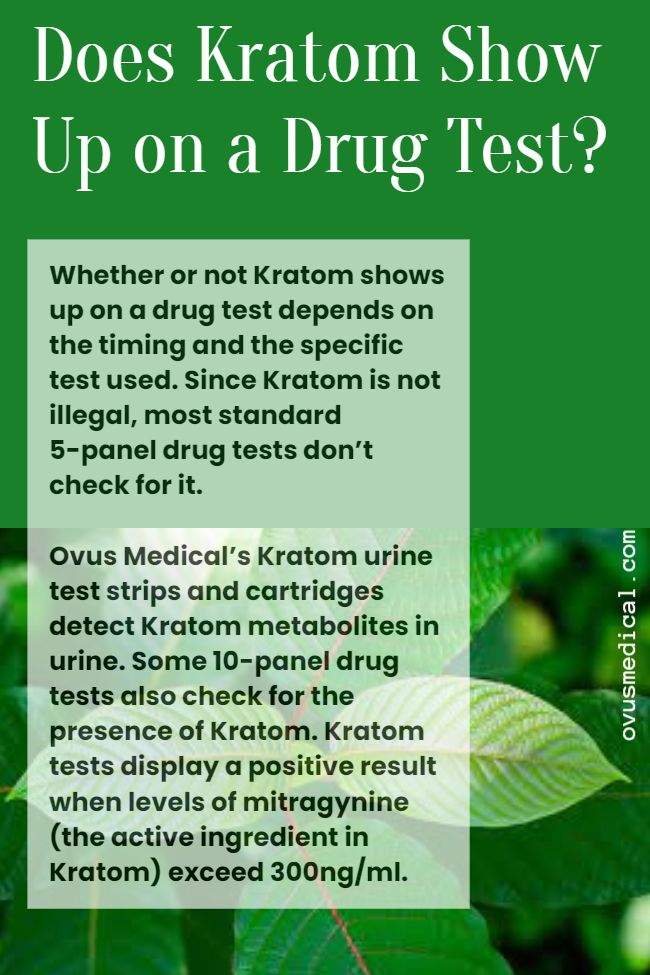 How Long Does Kratom Last?

The Kratom high begins about 10 minutes after ingestion and lasts between 2 and 5 hours. The amount ingested affects both the intensity and duration of the high.

Kratom’s half-life in the body is around 24 hours. That means, on average, it can take a week for it to exit your system entirely.

How Popular Is Kratom?

Despite its growing popularity, Kratom use in the US is still rare. According to The American Journal of Preventative Medicine, less than 1% of the US population reports using the drug.

Kratom use is more prevalent among people who abuse opiates. In that population, 10.3% of respondents use Kratom. This may be because they are trying to treat withdrawal symptoms without professional help.

Does Kratom Show Up on a Drug Test?

Whether or not Kratom shows up on a drug test depends on the timing and the specific test used. Since Kratom is not illegal, most standard 5-panel drug tests don’t check for it.

Hair, saliva, and blood drug tests do not commonly test for Kratom at this time.

Drug tests can detect Kratom up to a week after use. This length of time varies depending on the frequency of use, age, and body weight or body fat percentage. Heavier and older people tend to metabolize drugs more slowly than younger and thinner people.

Can You Test for Kratom?

Even though Kratom is legal, many organizations may find it helpful to test for the drug. Hospitals need Kratom tests for patients and may want to test employees for Kratom abuse as well.

Rehabs, schools, police departments, and probation officers might also test for Kratom. In states where it is not legal, law enforcement can use Kratom tests to make arrests.

Employers can test for Kratom as well. Especially in situations where there may be serious safety issues, such as construction sites and medical facilities, Kratom abuse by employees is a serious concern.

Kratom can be just as dangerous and debilitating as Schedule 1 controlled substances. If you routinely test for drug abuse, adding Kratom to the list of substances you test for makes sense.

Does Kratom show up on a drug test? Yes, it does, at least in some tests.

If you run an organization that needs to test for Kratom, Ovus Medical’s tests will fit the bill. They are over 99% accurate and give you results in minutes. The standalone Kratom tests can be used independently or combined with Ovus’ 12-panel or 13-panel tests. 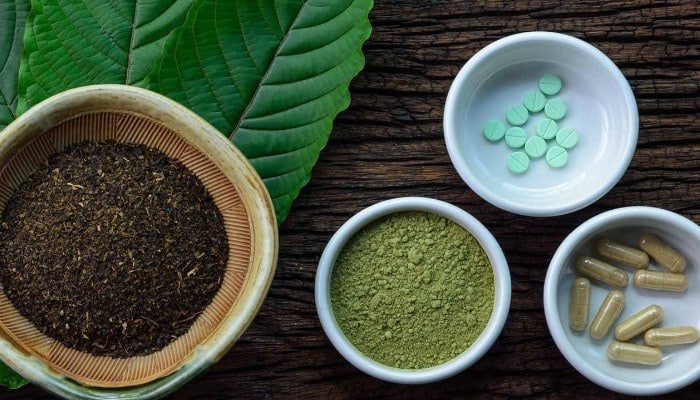