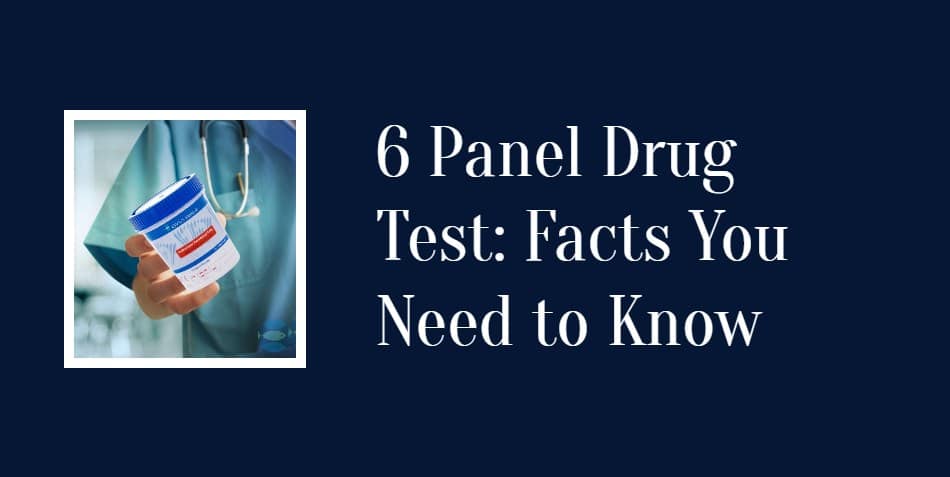 Briefly, this drug test is specific to detecting six illegal drugs in a single urine sample.

The most common type of drug testing is the urine drug test because of its ease of collection, affordability, and extended detection period.

What does a 6 panel Drug Test test for?

This is why if you suspect a loved one of using this substance, you must have him tested immediately. PCP shows up within 5 days after ingestion.

The three primary opiates that manifest in the test are codeine, morphine, and heroin. Of the three, heroin is by far the most addictive and dangerous. Codeine is a mild pain reliever. Doctors prescribe it to reduce coughing.

Morphine, on the other hand, is a natural substance from the opium poppy plant where heroin is synthesized. Users can become addicted to heroin even after a single dose. After ingesting heroin, urine drug screen panels can detect it for around 3 to 5 days.

Indeed, pre-employment urine drug testing program for Opiates is one way for businesses to maintain a safe work environment.

Amphetamine and methamphetamine are Schedule II drugs. Doctors usually prescribe them to treat narcolepsy and  ADHD.

Both are stimulants and appetite suppressants that increase the release of certain chemicals (neurotransmitters) in the brain. Thereby, users experience the effect of creating mental focus and thus reducing hyperactivity.

Employers screen job applicants and employees to help deter drug use to keep their workplaces drug-free. A drug screen can detect it for around two or three days.

Cocaine shows up on a urine drug test for up to a week after use.

Benzodiazepines or benzos are set Schedule IV drugs under the Controlled Substances Act. They are central nervous system depressants.

People who take benzodiazepines feel euphoria (or high) but can lead to psychological dependence. As a result, they feel they need the drug to cope with daily life.

Detection times in urine can be up to 10 days. Benzos are metabolized in urine, producing metabolites. Hence, metabolites confirm the presence of Benzodiazepine.

Marijuana is a commonly used drug made from the Cannabis sativa or Cannabis indica plant. THC is the psychoactive ingredient of Marjuana which is responsible for the intoxicating effects.

Urine drug tests can detect THC  2-7 days for one time users and up to 10-30 days for chronic users.

Who Uses This Cup?

Workplace. Employers are required to test an applicant before hiring. Likewise, random testing is crucial after hiring to check for on-the-job drug use.

Sports organizations. Professional athletes usually need to take a test for performance-enhancing drugs or other substances.

Criminal Settings. Drug testing is also involved in a criminal or motor vehicle accident investigation. Moreover, screening may be ordered as part of a court case for legal or forensic purposes.

Health Care. In the healthcare system, it is specifically for treatment and compliance monitoring purposes.

Example: Monitoring opioid use. If a health care provider prescribes you an opioid for chronic pain, he may order a drug test to make sure you are taking the right amount of your medicine.

Educational Institutions. Schools may request their students to take a drug test as a requirement for enrollment. In the same manner, Ivy League universities and community colleges also oblige collegiate athletes to test for stimulant substances.

In summary, 6 panel drug test is a rapid one-step drug screening for the simultaneous, detection of multiple drugs and metabolites in urine specimens.

Check out Ovus Medical. They provide the highest quality drug testing supplies in the market.