What is an adulterant and why is it important to test for them?

Drug info A L – Adulteration is the tampering of a urine specimen during collection in which the donor attempts to alter the final test result or outcome.

What is Specimen adulteration? It is the manipulation of a sample that may cause false-negative test results for the presence of drugs of abuse. Common adulterants that may affect drug testing are water, soap, bleach, vinegar, oxidants, lemon juice, Goldenseal tea, Visine eye drops, and salt. Therefore, when a company adopts a drug-testing program, it is recommended that they include ‘adulterant testing’. They should always include these in their instant drug screening. Adulteration is a real issue in drug testing. Corporations and agencies must remain mindful of these tactics while working to combat drug abuse within the company. It is important to understand for interpreting clear and accurate results.

Alcoholism and Alcohol Abuse is Still a Concern

Alcoholism and Alcohol Abuse may not make headlines the way it used to, but it is still a constant concern in today’s society. Millions of people affected every day. Alcohol abuse poses a threat to the people around the abuser and can put them in dangerous situations. Those who continue to abuse Alcohol and can still function in society pose a danger to themselves and others. The unfortunate truth is that when one is regularly consuming large quantities of alcohol, they are still impairing their actions and judgment.

At Ovus Medical, we offer EtG tests that are more commonly used to test individuals’ sobriety levels due to its sensitivity. Our latest BLOG has further information. Our EtG Tests can detect Alcohol in the urine for up to 80 hours. The Etg is a highly sensitive urine testing strip. Far superior to the regular alcohol test strip.

EtG Tests can detect Alcohol in the urine for up to 80 hours. This is a highly sensitive urine testing strip. Far superior to the regular alcohol test strip.

The most popularly prescribed benzodiazepines include Valium© (diazepam), Xanax© (alprazolam), Ativan© (lorazepam), and Librium© (chlordiazepoxide). Though not legally prescribed, the benzodiazepine Rohypnol© (flunitrazepam) is well known for its notorious reputation as a date-rape drug.

Benzodiazepine is a depressant. Depressants slow down the activity of the central nervous system. These drugs are also called downers for the “relaxation” induce. Depressants relieve stress and anger and often cause drowsiness or sleepiness.

What is Suboxone / Buprenorphine

Buprenorphine is the main ingredient found in Bunavail, Subutex, Suboxone, and Zubsolv. It is a semi-synthetic opioid and partial agonist used for opiate addiction. Buprenorphine belongs to a class of drugs called mixed opioid agonist-antagonists. Withdrawal symptoms are prevented with the help of Buprenorphine of other opioids.
Buprenorphine is the most commonly prescribed medication. Suboxone is a combination of Naloxone and Buprenorphine.

Naloxone is the active ingredient in Narcan.  Narcan is more popularly known for ‘saving lives,’ being a medication to treat overdoses.  The presence of Naloxone in Suboxone discourages users from injecting it up because the Naloxone will cause them to experience instant withdrawal symptoms. This combination successfully prevents the improper use of Buprenorphine.

Do I have a Painkiller Addiction? Guide & Self-Assessment- Click here

Cocaine is a very addictive drug. It can be either inhaled through the nose, shot into a person’s veins, or smoked. It is not uncommon for someone to take heroin and cocaine in one shot together. This is known as a speed ball and it is extremely dangerous. Heroin is a downer and cocaine is an upper. When taken together it produces a wave effect where a person is up then down. This is a bad combination because your heart will be rushing one moment and depressed the next.

Drug testing for cocaine can be a very serious issue. The problem is that cocaine is only detectable in a person’s system for a short period of time, three days to be exact. Their bulk order tests are CLIA waived and as accurate as you can get for testing cups at these wholesale prices. Ovus Medical has drug screening cups for as low as $1.99 per cup. They are FDA approved and are instant-read, point-of-care cups. Results show up within two minutes and are 99% reliable. These, tests, like other test do have their limits when it comes to cocaine, but if it has been three days or less, these cups will read for it.

Fentanyl, a  synthetic, opiate pain reliever is one of the strongest opiates available today. It’s 50 to 100 times more potent than morphine. As a result, it uses to relieve severe pain, after surgery, during cancer treatment, and to manage breakthrough pain.

In its prescription form, Fentanyl is known by names such as Actiq, Duragesic, and Sublimaze. However, many people obtain Fentanyl without a prescription on the black market. When used for recreational purposes, Fentanyl typically comes in the form of powder. Spiked on blotted paper or mixed with heroin, cocaine, or other street drugs to amplify the potency.

Fentanyl abuse is dangerous and even deadly. In March 2015, the Drug Enforcement Agency (DEA) issued a nationwide alert identifying Fentanyl as a threat to public health and public safety.

Will Fentanyl Show Up on a Drug Test?

Although Fentanyl is much stronger than other opiates, it is not commonly tested for on standard drug tests, which aim to detect the presence of opioids that metabolize into morphine. Since Fentanyl doesn’t metabolize into morphine, it’s unlikely to detect unless advanced drug test ordered. However, if advanced drug test ordered, Fentanyl is detected through urine, hair, saliva, and blood tests. Fentanyl can detect in urine for eight to 24 hours, in blood for up to 12 hours, in saliva for one to three days, and in hair for up to 90 days.

Contrary to popular belief, GHB (gamma-hydroxybutyrate) is not a newly-discovered designer drug.   GHB is actually a naturally occurring product of human metabolism. This is a carbohydrate found in abundance in our diet as it exists in animal meat as well as wine and small citrus fruits. It is also biologically synthesized from GABA (gamma-aminobutyric acid), an amino acid that is structurally similar to GHB.

It is sometimes called “G” or “liquid ecstasy” and is popular among the party crowd at clubs or raves, who use it for its euphoric and sedative effects. Combined with free-flowing alcohol at these parties, GHB has become a major “weapon” against women (and sometimes even men) who unwittingly ingest GHB through their unattended drinks as it’s known as a dangerous date rape drug. The illicit recreational use of this drug in the United States has been steadily increasing since the mid-1990s, made possible by local production activities by underground laboratories. 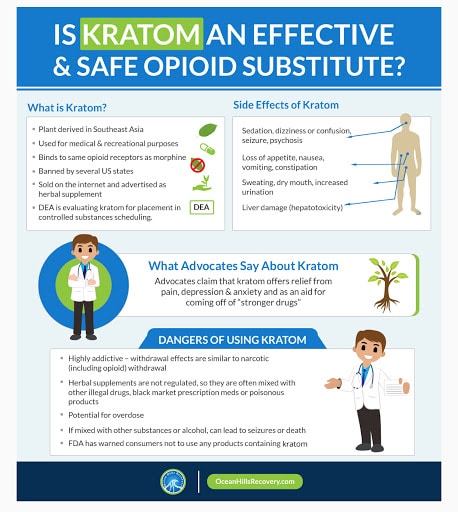 Kratom (Mitragyna speciose Korth) is a tropical forest tree indigenous to Malaysia, Thailand, and Myanmar. It also found in New Guinea, Borneo, and the Philippines. The tree grows up to 25 meters high. It has elliptical leaves that heart-shaped at the base, pointed at the tips, and hairy on the underside nerves. The leaves are about the size of an average man’s palm when fully mature. The tree bears oblong-ovoid (egg-shaped) fruits and yellow flowers.

The bitter leaves contain psychoactive opioid compounds and have been consumed for thousands of years in Southeast Asia and more recently in other parts of the world for uplifting moods, boosting energy, mental clarity, and pain relief. It is also believed to an aphrodisiac.

LSD: Here at Ovus Medical, we are keenly aware of the effects of this hallucinogenic drug.  In recent years the use of psychedelic drugs has declined, however, the risks of prolonged usage still can cause lasting harm.  Many have been concerned about its appearance on routine drug tests.  For those who concerned about testing positive, it’s good to know how long LSD will stay in the system.

How Long Does LSD Remain in the Body?

Information from drugrehab.com provides an insight as to how long this hallucinogenic stays in the system.
Though everyone metabolizes differently, studies show that LSD remains in the body: