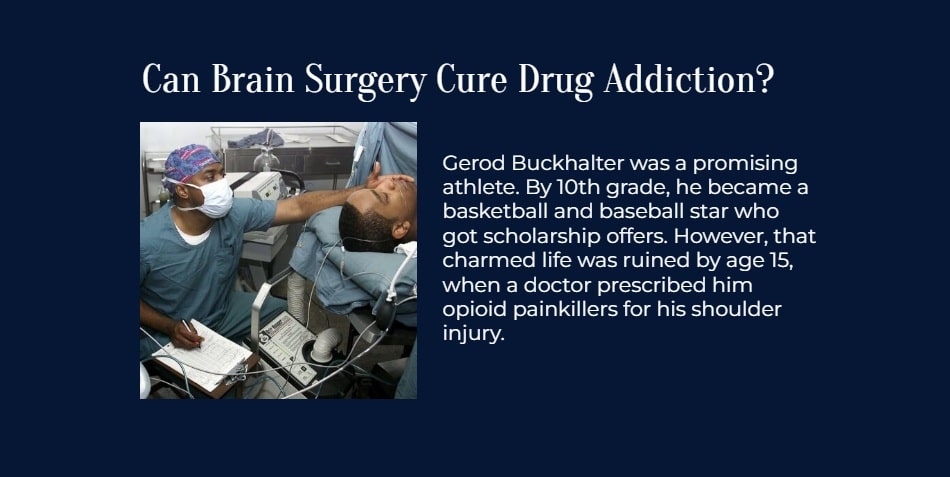 For many people suffering from Substance Abuse Disorder (SUD), finding a cure to end their plight has been a challenge. Some of them may have tried different methods to help them stop using drugs to no avail. However, recently, a man who underwent experimental brain surgery has stopped using drugs and has been sober for 21/2 years. With this in mind, you might wonder – can brain surgery cure drug addiction? Read on and find out.

Gerod Buckhalter was a promising athlete. By 10th grade, he became a basketball and baseball star who got scholarship offers. However, that charmed life was ruined by age 15, when a doctor prescribed him opioid painkillers for his shoulder injury.

Opioid painkillers like Fentanyl are considered Schedule II drugs. Although they have legal, medical uses, they have a high potential for abuse. This is why people like Gerod became dependent on it. Sadly, millions die from their drug dependence. Even Gerod had some close calls himself.

For over 15 years, Gerod has tried different kinds of drugs. He attempted to stop several times but only managed to stay sober for three months. His parents were too concerned of his condition, but they were not able to help him get rid of his dependence.

Gerod truly wanted to change. He wanted to live a new life, but his dependency on drugs stopped him. In desperation, he readily agreed to undergo the experiment funded by the National Institute on Drug Abuse (NIDA).

During the procedure, Dr. Rezai drilled a hole in Gerod’s skull, where he inserted an electrical probe made of a fine piece of wire.

He used the probe to monitor Gerod’s brain activity while being shown different images of drugs and similar pictures meant to arouse his cravings.

Nothing is final yet, as Dr. Rezai is still waiting for the results of the fourth patient. One of the patients achieved the same results as Gerod, but the other suffered from a relapse.

But considering that two out of four patients successfully overcame drug addiction, there’s a 50-50 chance it will work for others.

A cure for drug addiction?

Critics say that Deep Brain Stimulation is still in its infancy. As such, it might cause adverse side effects like:

Additionally, the critics are wary of whatever long-term side effects the procedure might cause. Therefore, deep Brain Stimulation still needs to be studied thoroughly and extensively.

If you or a loved one needs help combating drug addiction, brain surgery might help. It might be costly, but considering the harmful effects of drug dependency, this method might help save lives.

Do you want to read more tips and news about drug addiction, drug testing, and similar topics? Then, visit the Ovus Medical Blog. We have a wealth of information you can benefit from.