Can You Test for Kratom? 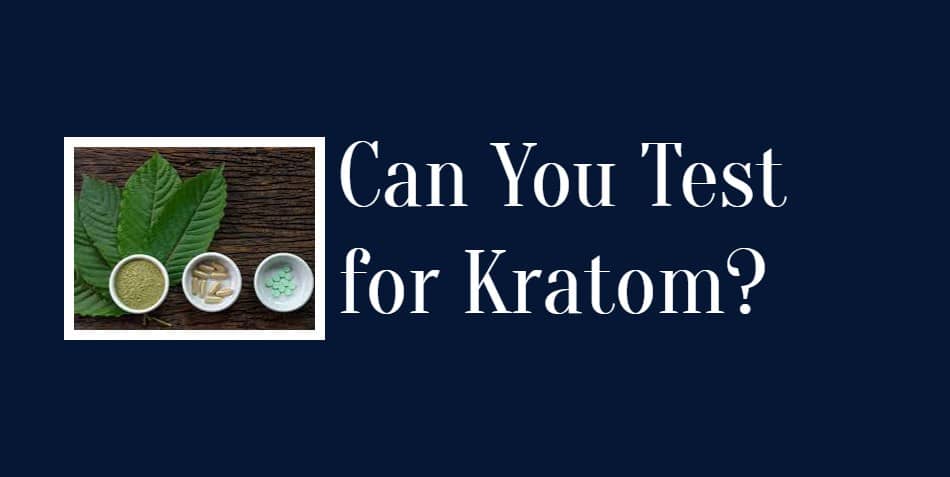 Kratom is a tree with the scientific name Mitragyna Speciosa. Its leaves contain compounds that have mind altering effects. Although it is not currently an illegal substance, long-term use can lead to dependence and abuse. But, can you test for Kratom? Read on.

Kratom is an evergreen tropical tree native to Thailand and other Southeast Asian countries. This coffee species is best grown in hot, too muggy habitats.

Users eat the fresh leaves and crush and brew the dried ones. One unusual method of ingesting Kratom is called toss and wash. Users take a spoon full of the powder and put it in their mouth. They then wash that down with water or juice. Fast and easy!

There are two main active components in the leaves of Kratom: mitragynine and 7-hydroxymitragynine. These substances are responsible for Kratom’s psychoactive effects. Once they reach the brain, they influence mood and anxiety.

The physiological effects are similar to sedatives when consumed in high doses and stimulants when consumed in low amounts. Although it is not an opioid, it acts on the same brain receptors as opioids. Kratom’s effects intensify if someone takes it on an empty stomach.

Kratom is currently legal as sold in gas stations, convenience stores, head shops, and paraphernalia shops in most US parts. People can also order Kratom over the Internet with the following names.

Brand Names of Kratom include but not limited to:

Because it is legal and plant-based, they assume it is safe. However, it is not.The FDA is concerned that Kratom seems to have properties that predispose users to addiction, abuse, and dependence.

Why People Use Kratom

Traditionally, manual laborers, farmers, and fishers regularly used this herbal plant to relieve fatigue and manage pain.  For centuries, they used Kratom in their socio-religious ceremonies as a source of spiritual transcendence to uplift their spirits.

However, modern science proved Kratom as an effective plant-based libido enhancer. It is because of its aphrodisiac properties.

Pain relief is the principal reason why people use Kratom. Its alkaloid components are responsible for the action. When ingested or consumed, kratom leaves produce complex dose-dependent stimulant and analgesic effects. Kratom’s mood-boosting properties helped users stop using other drugs, specifically opiates. Some use it to alleviate symptoms of morphine and ethanol withdrawal.

Moreover, it works as an antidepressant and a hunger suppressant.

Commonly reported benefits according to a review by Singh, et al include:

Side Effects of Kratom

Kratom has varying effects on people based on dosage amounts. Long-term effects can be unpleasant and potentially life-threatening.

Side effects of Kratom include:

How long does Kratom stay in the body?

Thus far, it would take 24 hours to eliminate 50% of the Kratom in the body based on various research conducted.

Usually, it would take just over five days for Kratom to leave the system. However, other factors would come into play that may affect elimination time.

Can you test for Kratom?

One of the biggest reasons people chose Kratom over other drugs is their belief that it will not show up on a drug test. Additionally, since Kratom is not yet a controlled substance, it is not part of the routines of standard drug testing. Hence, it does not show up. However, some Kratom alkaloids are now identified on specific drug tests using urine or blood samples.

Can you test for Kratom? Yes, it is possible! Drug tests for Kratom are now available. Use it to your advantage.

If you need to undergo Kratom drug testing and want to get accurate results in just a few minutes, check out Ovus Medical’s Kratom Test Strips.