How Do Drug Tests Work? 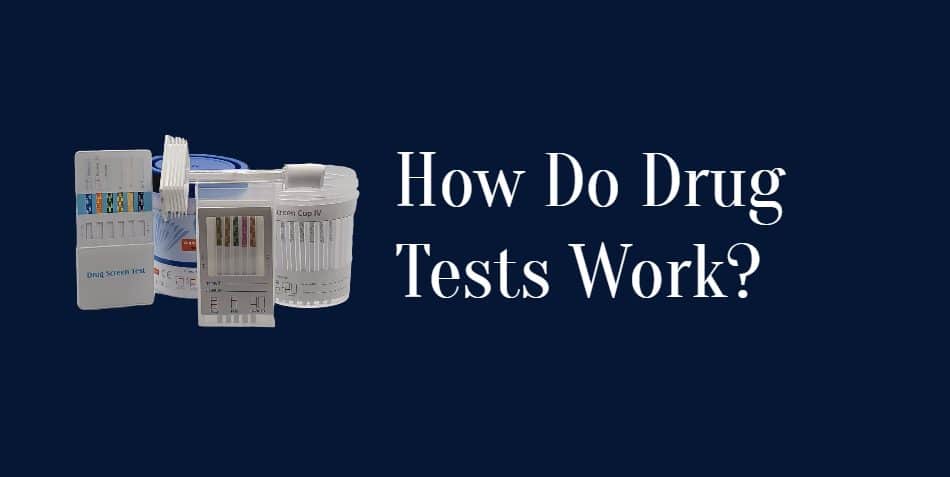 In the United States, around 71% of workplaces with over 1,000 employees conduct drug tests, and 42% test for alcohol misuse. Worksites with 50 to 99 employees also test for drugs 40.2% of the time.

Even if the reasoning for drug testing is different, it is not a factor in how drug testing works. Instead, factors include the type of drug test, chosen sample, and drugs tested for.

Keep reading to learn everything you need to know.

What Is Drug Screening?

Drug screening, or drug testing, is a process that screens for prior or current drug use. Testees will provide a sample to be tested, commonly urine or saliva.

With these samples, the process will conclude whether certain substances or chemicals are present in the body. When a substance is detected, the test is positive, and vice versa, the test is not detected.

Drug screening is common for employers, treatment centers, pain clinics, drug rehabilitation centers, etc. The accuracy of a drug test will depend on several factors, including the test used and the substance tested.

So, how do drug tests work? The specific process depends on the type of drug test and what sample is used.

How Does a Urine Drug Test Work?

A urine drug test, also known as a urinalysis, will test for recent or current drug use. With one urine sample, urinalysis can accurately test for different substances.

A urine test has a different detection window than certain tests. However, marijuana is often detectable in urine testing for a month or longer in heavy users.

Although the shorter detection window might seem like a setback, a urine drug test is commonly used for a variety of reasons. In legal instances, a urine test is known to be more accurate than others.

How Do Mouth Drug Tests Work?

Depending on the drug, a saliva test may offer a longer window of detection.

Drug tests are reasonably accurate. If you purchase drug tests in bulk from a reputable company, you can benefit from 99% accuracy rates.

However, some situations can lead to an inaccurate drug test. The following things might cause a false positive test result:

A drug test might come up as inconclusive if the testing sample was tampered with. This is most common with urine drug tests, which makes saliva drug testing a great option.

An inconclusive result could be from a diluted sample. Although this might mean that the urine sample was diluted purposely, sometimes a high water intake before the test can cause this as well.

Now, let’s get into the specifics of how a drug test works depending on the type of test used. Once you have a better idea of each, you can decide which is best for your reason for testing. 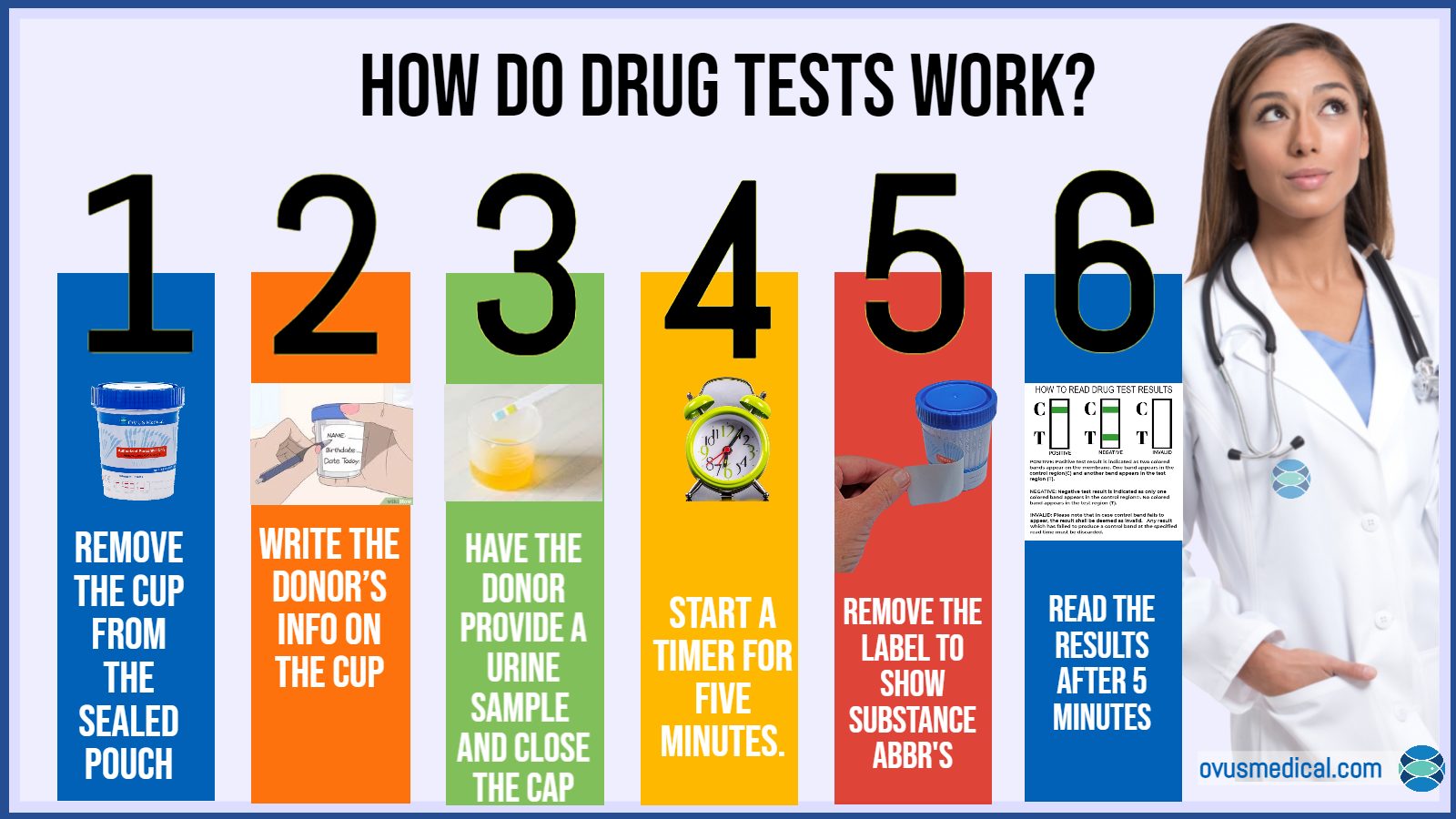 These drug testing kits lead to accurate results within minutes. They are ideal for testing in the workplace, treatment centers, schools, and testing labs.

So, how do drug tests work for jobs and other circumstances? These are the steps:

A test with a positive result should be confirmed through another drug testing method, so sending it to a lab for confirmation is recommended. Don’t interpret results after 8 minutes, as they will be invalid.

Drug test cups come with temperature strip labels so that you can test the urine for the correct range. You’ll notice a green color when the temperature is ready. The proper range for adult urine is between 90 and 100 degrees F.

There is also a six-panel urine drug test cup with THC that tests for the following six substances:

Depending on what you need to test for, one of the 6 panel tests might be more beneficial than the other.

8-Panel Drug Test Cup and Beyond

There is also an 8-panel drug test cup that tests for the following substances:

In the 12-panel drug test with PCP, the same drugs are tested for except tricyclic antidepressants (TCA) and adulterants. Instead, the test includes phencyclidine (PCP).

The last 12-panel test offered is the same as the first one but doesn’t test for adulterants. The 13-panel drug screen includes adulterants or fentanyl (FYL) depending on which test cup you choose.

A 16-panel drug test cup tests for these substances:

On the Ovus Medical website, you can get a better idea of the substances tested and the cutoff levels for each.

Unlike urine drug test cups, a urine test strip will only test for one substance per strip. The substances tested through this drug screening from Ovus Medical range from the following:

These are some of the most common tests, but you can find urine drug test strips for Ritalin, heroin, ketamine, and hydrocodone, among others. You can also find test strips to learn more about pregnancy and nicotine use as well.

Now that you know the types of drug test strips, how do they work? The instructions are as follows:

These affordable testing strips are easy to use and provide 99% accuracy.

It’s important to note that with this type of test, negative results might be displayed within 3 minutes. You should only seek confirmation of positive results after 5 minutes.

Results read after 10 minutes are invalid. These tests have highly sensitive detection cutoff levels and a long shelf life, so you can benefit from bulk wholesale prices.

The substances tested with this type of test are among the same ones tested through drug test cups.

The oral swab drug test uses a saliva sample rather than a urine sample to detect substances in the body. At Ovus Medical, the saliva drug test swab has 10 panels that test for the following:

The different substances are color-coded so that the results can be easily identified. It’s nearly impossible to adulterate a saliva drug test, so false negatives or invalid results caused by this are uncommon. 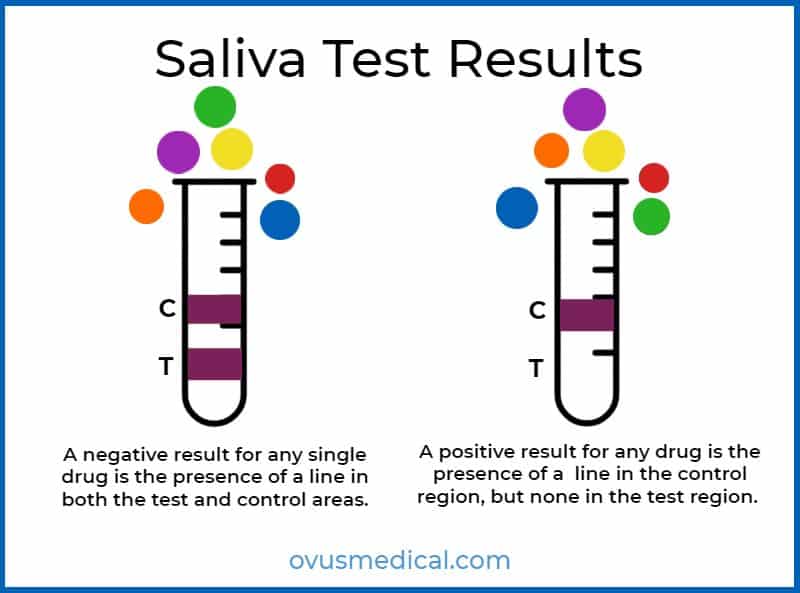 Plus, oral swab drug tests are a less invasive option when compared to urine drug tests. They also have a 99% accuracy rate.

Before testing, make sure the donor avoids eating, drinking, and chewing gum or tobacco for 10 minutes prior to the test. The swab should be brought to room temperature before using it, but the stick and test tube should be kept in their packaging until the test.

Here’s how this test works:

Results for this type of test should not be read after one hour.

Donors should not bite, chew, or suck on the sponge part of the collection stick. The saturation indicator strip will change color when you have had the swab in your mouth for long enough.

For all four of the above drug tests, interpreting the test results will be the same process. If the specimen, urine or saliva, contains more than the predetermined cutoff levels, the result is positive.

Keep in mind that the panel drug tests will have multiple testing zones that you’ll have to interpret, while the test strip only has one.

Each test will have a control (C) region and a test (T) region. When one colored band shows up in the control region but not in the test region, the test is positive.

A test result that includes two colored bands, one in the control region and the other in the test region, is negative.

A colored band should always appear in the control region. If a colored band fails to pop up in either region or only shows up in the test region, the test is invalid. For accurate results, you’ll have to take the test again.

This problem should not persist, but if it does, you can reach out to your local distributor for guidance.

Remember, a positive test should be sent to a toxicology laboratory to confirm the results.

How Do Drug Tests Work? Your questions explained

After explaining the answer to “how do drug tests work?”, you should have a better idea of the process. Depending on the drug test you use, testing will be different, but all results are interpreted in the same way.

When you use Ovus Medical as your drug test distributor, you’ll have access to all of the above drug tests. For those who need at-home drug testing kits, small order options are available.