How Long Does Acid Stay in Your System? 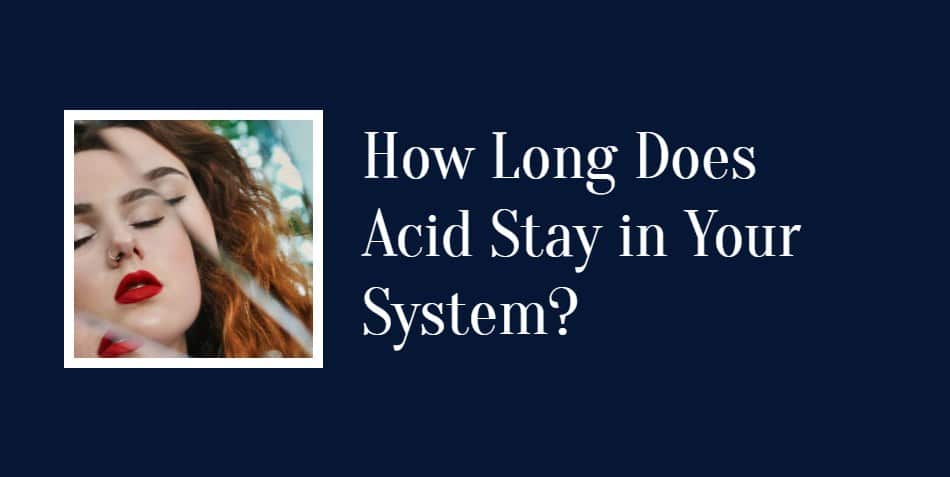 According to the National Institute on Drug Abuse, over 27 million people in the United States used acid at some point in their lives. While people use acid for many reasons, there have long been rumors on its long-term effects to stay in the body. How long does acid stay in your system? Read on to find out.

Acid is known scientifically as lysergic acid diethylamide (LSD). It is an illicit synthetic substance with hallucinogenic properties that cause dizziness and visual hallucinations. The drug is available as a capsule or liquid (applied to blotter paper) to consume orally.

But how long does acid stay in your system? Below is a guide that can help you out.

Side Effects of LSD:

What Does Acid Do To Your Body?

People often use LSD for a variety of reasons. LSD is commonly used for recreational and social purposes, while others also use it for spiritual causes, artistic inspiration, and therapeutic purposes.

However, the effects of LSD are very unpredictable. A bad trip on acid can be very psychedelic, causing one to feel out of time and unable to identify oneself. People who are under the influence of acid are usually suffering from the following side effects or withdrawal symptoms:

Please note that an individual’s experience may vary depending on the amount taken or factors such as the person’s mood, personality, or environment in which they consume it.

When Do You Start Feeling The Effects?

Typically, LSD is sold as a capsule or liquid packaged in small bottles or added directly to blotter paper, sugar cubes, and gelatin squares. Generally, most consume it orally, but some apply a drop itself into the eye.

The first time you ingest the drug, it takes 20 minutes to 2 hours to start feeling its effects. Upon onset, it takes about 35 minutes for the results to peak.

How Long Does Acid Stay in Your System?

For years, the belief was that acid would stay in the spinal cord forever after consumption. However, that belief was proven incorrect after thorough research and testing.

How long does acid stay in your system? After ingesting, LSD is absorbed by the bloodstream and distributed quickly throughout the body. Researchers have found that the substance stays in the body for up to 12 hours.

However, factors like age, metabolism, and food consumption can affect how long LSD remains in the body. 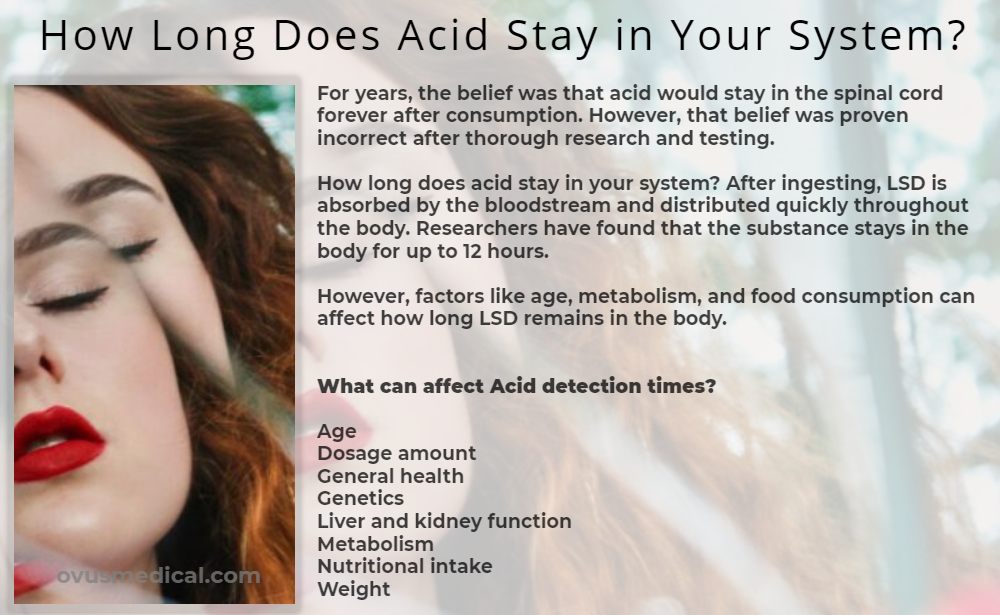 Types of Drug Tests That Can Detect Acid

The following are the most common types of drug test used to detect acid in the body:

Tests by blood are usually the most reliable way to screen for drugs, but they are generally the most invasive. LSD stays in the blood for 6 to 12 hours.

Among all other drugs, LSD has one of the shortest detection times. Urine tests can detect it up to 8 hours after consumption.

Hair tests can detect the presence of LSD in the body up to 90 days after its last use. However, the use of this test is the least common.

What can affect Acid detection times?

Several medications can cause urine drug screens for LSD to show as false positives, including:

How long does acid stay in your system? It depends on a lot of factors. LSD stays in the system for only a few hours after taking it, with its effects quickly wearing off. However, its devastating side effects may persist for several days, depending on the dosage, health condition, and resistance to the said substance of abuse.

Due to LSD’s short detection time, a more specialized laboratory technique is necessary to detect its presence in the body. But today, there are test kits available that are easy to use, provide fast turnaround times, and deliver reliable results for acid detection.