How Far Back Can a Drug Test Detect Alcohol? 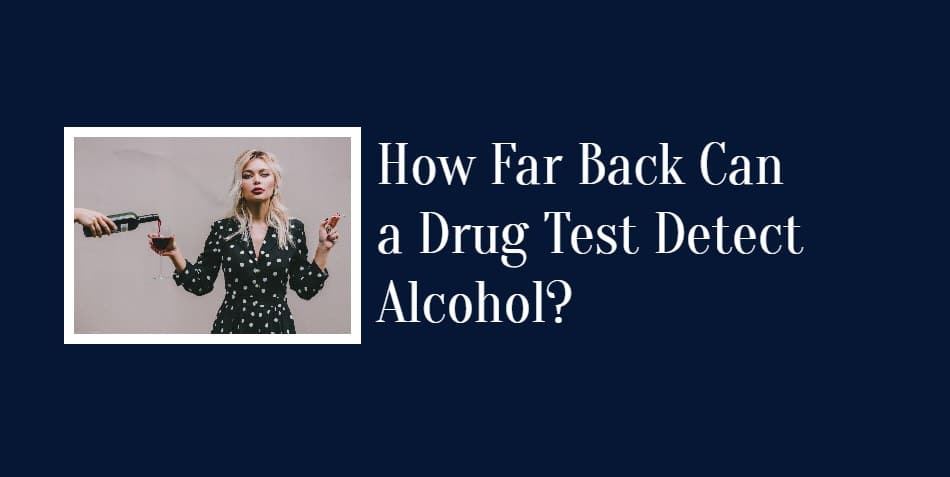 One of the most significant influences on health problems, physical abuse, violence at home, family separation, and issues at work is alcohol. Thus, state and federal laws mandate testing for alcohol in various settings as a scientifically proven means to monitor an individual’s alcohol use over time. But how far back can a drug test detect alcohol? Below is a guide that can help you.

How far back does alcohol stay in the system?

Alcohol stays in the body for a certain amount of time depending on how much an individual consumes, how strong it is, the frequency of usage, and a person’s physical condition or metabolism.

In most cases, evaluators use urine specimen to test the presence of alcohol in the system. Specifically, there are two types of urine alcohol tests. And the selected kind of test can vary when it comes to alcohol detection times. Read on to find out.

An alcohol test is considered the standard alcohol screening method. This test aims to determine if an individual has a chronic alcohol dependency, which can help determine if treatment is needed. However, this method can only detect very recent high-amount ingestions of alcohol.

What does an alcohol test look for?

This type of test determines whether ethanol is present in urine samples. But the downside is that ethanol evaporates very rapidly and lasts in the body for only 4 hours or less. As a result, this method is unreliable for individuals who have intentionally avoid drinking alcohol before taking the test.

Where is the alcohol test typically used?

This test is critical in situations that call for immediate testing and quick test results. Additionally, this test is crucial to prevent abstaining from alcohol consumption before the test.

This test is commonly used randomly as part of a drug-testing program, or the employer may order if there is a suspicion of intoxication in the workplace. In addition, evaluators may conduct the test in the wake of an accident to investigate the cause. And also if ordered by a court as part of a legal proceeding.

On the other hand, the EtG test has a longer detection window than the standard alcohol test. This test is sensitive to detect alcohol in the urine sample, even for short-term or low-level consumption.

Additionally, since the test is sensitive to alcohol detection, exposing someone to alcohol products may result in false positives.

What does an EtG test look for?

This test screens for the presence of ethyl glucuronide in the urine sample. It is a substance produced in the liver when consuming alcohol that excretes into the urine. After ingesting alcohol, this metabolite remains in the urine for 24-48 hours based on the study conducted on Alcohol and Alcoholism. Other sources, however, claim it remains 70-80 hours.

Where is the EtG test typically used?

As the test can detect even a single alcohol intake, it is critical in situations where alcohol abstinence is crucial. This test assists in the detection of relapse among alcohol-dependent individuals in withdrawal treatment. Also, workplace testing, DUI programs, and other programs that promote sobriety use this type of test.

How long can alcohol be detected in the system?

There are varying rates at which people metabolize alcohol. And some people will clear it faster than others. Besides that, alcohol tests using blood, breath, saliva, hair, and urine as the most common methods yield different detection times. But, in general, here are the average alcohol windows of detection in the system: 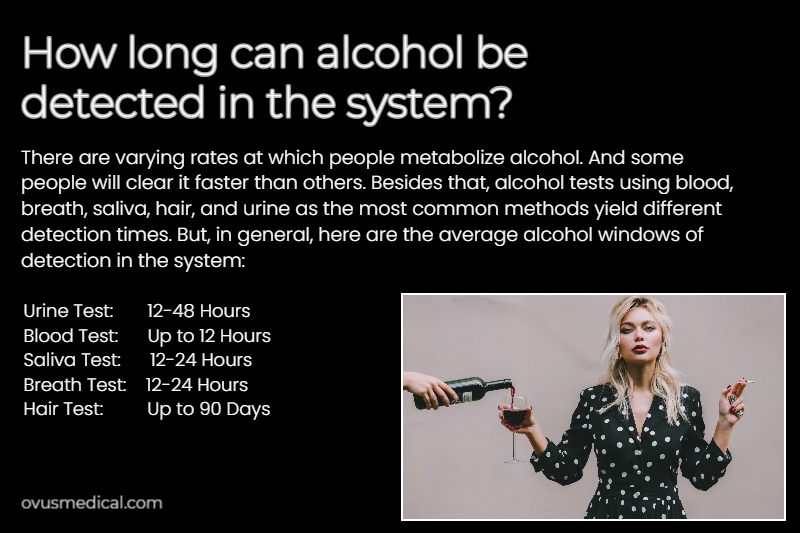 How far back can a drug test detect alcohol? Alcohol detection in the system is very dependable for several reasons. Age, gender, body composition, and overall health can affect the body’s ability to process alcohol.

Apart from that, the type of drug test used plays an essential role in determining the length of time upon detecting alcohol in the system. As such, every kind of test plays a distinct role depending on the situation it is meant to solve. Certain circumstances may not apply in other cases.