How Long Do Drugs Stay in Your Saliva? 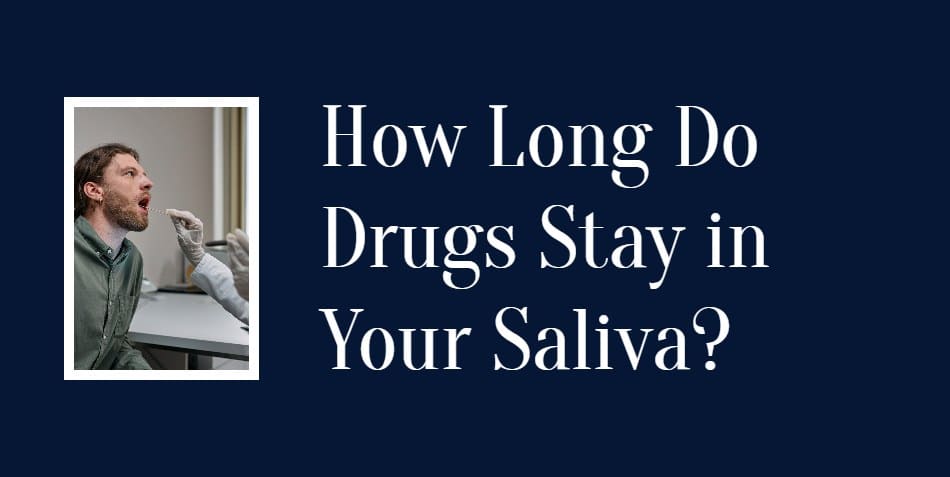 Organizations with drug and alcohol testing programs see urine drug screens as the golden standard and thus use them most of the time. However, saliva testing is a type of test becoming more popular with these organizations. As discussed in this article on Ovus, it is because this testing method is quick, easy to do, and non-harmful. A saliva test is also very efficient in showing recent drug use: it can give results in as little as ten minutes. But how long do drugs stay in saliva, and what does a saliva drug test for?

How long drugs stay in the saliva depends on the substance.

Standard testing for drugs doesn’t include alcohol tests, but you can still test a person on suspicion of alcohol abuse or to check if they are really not drinking alcohol. A saliva drug test can detect alcohol from 6 hours and all the way up to 3 days.

Barbiturates are drugs for treating sleeplessness and seizures. They are prone to abuse because of the relaxing sensation they bring. An oral swab test can detect this drug for up to three days.

Amphetamines are stimulant drugs for curing being overweight, sleeping disorders, or attention disorder. However, some use them for recreation or performance enhancement, both of which are illegal. Saliva testing kits can detect Amphetamines from 12 hours up to 5 days after use.

Benzodiazepines are calming drugs and are a remedy for anxiety or insomnia. However, they are also highly addictive. The drug detection time varies greatly, ranging from 1 to 10 days, and depending on the type of benzodiazepine.

Many states have already legalized marijuana. However, other states still find marijuana illegal, and those states conduct marijuana testing. Saliva tests can detect marijuana use within 24 hours up to 72 hours.

Since some doctors prescribe opioids for pain relief, some end up abusing these drugs. One popular and illegal opioid is heroin. Statistics show that its misuse is currently an epidemic in the United States. Detection times of the different kinds of opioids vary from an hour after use and up to 10 days.

Also known as “meth,” it is an illegal stimulant that brings happiness to the user. An oral drug test can detect Meth in as little as 10 minutes after use and as long as four days.

Cocaine is a very infamous and highly addictive stimulant drug, and it is illegal to use and possess this substance. Saliva tests cannot detect it after 72 hours.

Phencyclidine or PCP is a hallucinogenic substance. The user becomes very ecstatic and disconnected from normal life. Saliva drug tests can detect it from 24 hours up to 10 days after use.

Rave party goers commonly use this drug, also known as ecstasy or Molly. An oral test can detect it an hour after use, but all traces disappear 24 hours after use.

How Long Do Drugs Stay in Saliva – Other Factors

Even with these benchmarks, certain factors affect how long drugs stay in saliva. These include an individual’s metabolism, age, body fat percentage, tolerance for drugs, the amount of drug taken, and even the purity of the drug itself.