What Does MTD Mean on a Drug Test? A Complete Guide

by Joei Skeffington | Jan 5, 2022 | Do You Know What Causes Low Creatinine Levels in Urine Drug Test? 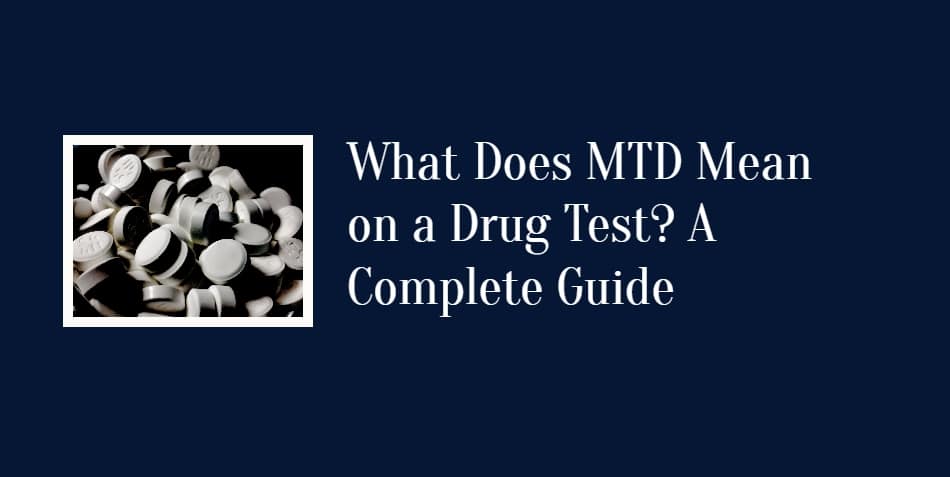 According to a survey of fifteen experts in the substance abuse field, it’s estimated that at a 50% testing rate, 40% will be daily users.

If you’re an employer looking to screen for additional drugs, you might be considering a methadone (MTD) test. But how do you know which one to use? And what does it mean if your employee tests positive for the MTD drug?

Keep reading as we cover everything around the question, “what does MTD mean on a drug test?”

During World War II, German doctors created Methadone, also known as MTD. When MTD was brought over to the USA, doctors initially used it to treat patients in extreme pain. While its effects are slower than other painkillers like morphine, it additionally blocks the high people get from substances such as heroin, cocaine, morphine, and oxycodone.

As a result, methadone has been used since the 1950s to treat opioid dependence. It’s administered as a pill or in a liquid form daily, which reduces withdrawal symptoms and cravings for opiates.

How Long Does Methadone Stay In Your System?

Clinical opinions differ among doctors on how long MTD remains in one’s system. It varies anywhere from two days up to as many as thirteen days.

Despite MTD being naturally processed out of your system within two weeks, some drug tests can still pick up traces of the substance for a short while after.

Why Test for Drugs?

When talking about methadone drug testing, there are many reasons one might want to test for this. For example, suppose you’re a family member and have noticed an extreme change in a loved one’s personality and behavior. In that case, you might want to administer a drug test so you can identify the problem and get treatment soonest.

Additionally, if you’re a known user, you might be tested weekly to ensure you’re no longer abusing substances. Or, if you’re an employer, you may want to administer random drug tests to ensure your staff is not using illicit drugs.

However, if you’re a clinician, you might be testing for MTD to ensure your patient takes their medication as required.

Does Methadone Show Up on a Drug Test?

Not all drug tests include screening for methadone. However, if the test provides methadone screening, it will appear on a drug test.

The MTD drug screen is most commonly included from the 10-panel drug tests and up.

There are two main ways to test for the MTD drug: a cup test or an oral swab. To get you more familiar with them, we’ll cover both of them here in more detail.

Drug test cups are the most common for screening for drugs. They’re easy to use, readily accessible, and very accurate. However, they do require privacy in the form of a restroom to administer.

You administer the test with these easy steps:

Results should not be read after one hour. A single band in the test (T) region indicates an invalid test.

Oral swabs use saliva to screen for drugs and are administered by collecting a sample from the donor’s mouth. The benefit of oral swabs is that they don’t require the same amount of privacy as urine samples and can be administered swiftly on the spot or in the privacy of a nearby room.

You administer the test via these simple steps:

Results should not be read after eight minutes. A single band in the test (T) region indicates an invalid test.

What Does MTD Mean on a Drug Test?

So what does it mean if the test comes back positive for methadone? Since methadone is not commonly used on the streets, a positive result will most likely mean that the user is on a treatment program for a previous opioid addiction and is taking their medication regularly.

However, it’s also important to note that people can become addicted to methadone, so it is essential to understand the treatment program prescribed.

The side effects of methadone can include, but is not limited to, the following:

Expand Your Screening to Include Methadone

Understanding what does MTD mean on a drug test is vital if you screen your patients or staff for the MTD drug. If a test you’ve administered comes up positive, it’s crucial to inquire further about why it came up positive.

If the user is on a treatment program, familiarise yourself with the program to note any irregularities or potential abuse.

If you’re looking to purchase tests that screen for methadone, we have multiple test options, from 5-panel through to 18-panel. We will have the test for you, from urine test cups to oral swabs. Contact us for bulk orders.