Drug Test Results: What Does a Faint Line on a Drug Test Mean? 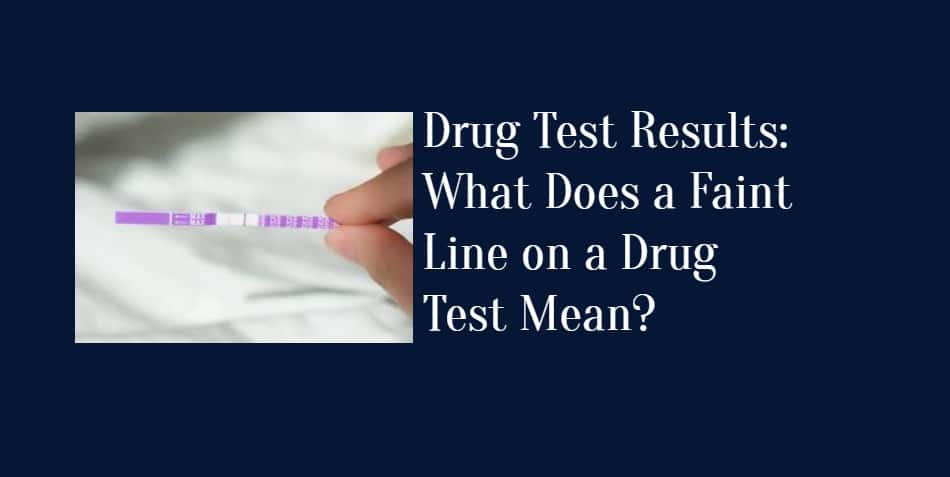 More than 10 million people a year are likely to spend time anxiously awaiting their drug test results in the United States.

Almost five percent of all tests came back positive for marijuana, amphetamines, cocaine, and other drugs in the workplace alone. Whether you are taking a drug test for a work interview, checking on your sobriety during rehab treatment, or because you are an athlete, the stakes can be very high.

The last thing you want is a faint line that leaves you torn over whether your test was positive or negative.

If you have to undergo a drug test, you might be wondering how it works, how accurate it is, and what could happen if the dreaded drug test faint line shows up.

Read on to learn more about drug tests and how to read them.

There are many reasons you may one day need a drug test.

In the United States, it is common for employers to ask you to undergo a drug test before they hire you. They might also conduct random drug tests at any time. This is to prevent workplace accidents or to choose the right person for a job.

Another everyday use of drug tests is by drug and alcohol rehabilitation centers. They will ask residents to undergo testing if they suspect them of using drugs or use random testing to track everyone’s sobriety.

There are also cases where you might have been in a car accident or other incident where lawyers require testing for legal purposes. Drug tests are also used to test offenders who are on probation.

How Do Drug Tests Work?

There are many different types of drug tests. However, we will look at two of the most common types, which test through urine and saliva.

Urine tests work by detecting trace amounts of drugs that flush through your system. The chemicals from drugs can be present in your urine anything from a few days to months after you consume them. This depends on how often the user takes drugs and the amount.

Urine tests can detect a variety of drugs:

You can use urine to detect drugs in an at-home drug test, over-the-counter drug test, or in a laboratory setting.

A testing strip or device is placed inside a urine sample, or a drop of urine is placed in a testing device. It is vital to follow instructions, especially on an at-home testing kit.

Drug test results take minutes to appear and can be interpreted via a band on the testing device, which will show positive or negative. A positive sample should be confirmed in a laboratory.

Testing saliva is another frequent method to determine drug use. The mouth is swabbed, and traces of recent drug use are detected in the saliva. The same drugs mentioned above can be detected through saliva tests. However, they typically only detect very recent drug usage of up to two days.

A saliva test, like a urine test, can result in a false positive due to interactions with different medications or even foods. If you suspect a false positive, you can dispute the results, take the test again, or request a different type of test in a laboratory.

What Does a Faint Line Mean?

Drug tests work differently from other tests, such as pregnancy tests. So how do you read drug test results from the lab or at home?

A drug test has a control line (C), which should always show up to prove that it is working. In the test line (T), an absence of a line is a sign of a positive result.

Therefore any line, no matter how faint, is a negative result, and no drugs were present. So before you panic and Google “extremely faint line on drug test Reddit,” remember there is no such thing as a faint positive.

To avoid any confusion, what does faintly mean? It means slightly or not strongly. In a drug test, this would be a faded line.

The unique chemical makeup of each person’s urine can influence how strongly a line appears on the drug test. The reading can be affected by the temperature of the urine, how long it has been exposed to the air, or how old the test is.

Substances in your body, such as medication or vitamins, can also lead to a faint line. But this should not be seen as a false positive.

The only positive result on a drug test is no line at all.

Suppose your test does come back positive, with no line showing up. In this case, you might have to take a Gas Chromatography-Mass Spectrometry (GC-MS) laboratory test to confirm the results. It is highly accurate and can detect even the tiniest amount of a specific drug.

How Do I Know if I Passed My Drug Test?

The most important thing to remember is how to read the lines on your test, so read the instructions carefully. Don’t panic if you see a faint line; you will not have any problems.

And similarly, if you are testing an employee or person in your treatment center, a faint line is nothing to worry about in drug test results. Contact us today for more information or to purchase your drug tests.