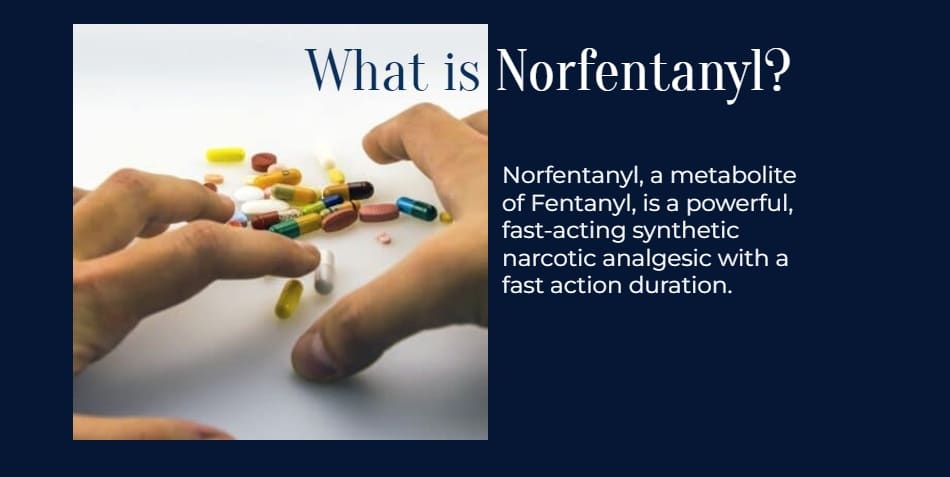 Norfentanyl, a metabolite of Fentanyl, is a powerful, fast-acting synthetic narcotic analgesic with a fast action duration. The Drug Enforcement Administration and the U.S. Department of Justice have classified Norfentanyl as a Schedule II Drug. This means Norfentanyl has a high potential for abuse, leading to severe physical or psychological dependence.

What is Norfentanyl used for?

Norfentanyl is a chemical compound that completes the synthesis of Fentanyl. Doctors have historically used to treat breakthrough pain and as a pre-operative pain reliever. Today, it is frequently used in illegal drug laboratories.

How long does Norfentanyl stay in urine?

Norfentanyl can be detected in urine up to four days after last use, according to a study. Norfentanyl was present in more significant quantities than Fentanyl immediately after use. Additionally, this Schedule II drug was detected in all patients at 48 h and in 4 of 7 patients at 96 h.

How long does Fentanyl stay in urine?

SInce Norfentanyl is a metabolite of Fentanyl, it is crucial to mention Fentanyl’s duration in the body. A urine test can detect Fentanyl between 24-72 hours after the last use. On the other hand, hair tests can detect the drug for up to three months, while blood tests can detect it between five and forty-eight hours after use, depending on the amount taken.

Which type of drug test can detect Norfentanyl?

Urine, hair, and blood tests can all detect Fentanyl. However, experts believe that saliva drug testing is not a viable screening substitute for detecting Norfentanyl.

What’s the need for Norfentanyl and Fentanyl drug testing?

Nearly 92,000 persons in the U.S. died from a drug-involved overdose in 2020. Fentanyl and other synthetic opioids are responsible for 56,516 of those deaths.

By itself, Fentanyl has legitimate medical use. But since it’s a Schedule II drug, it has a high potential for abuse and misuse. As a result, patients prescribed Fentanyl typically misuse the drug, which eventually leads to overdose.

What can cause a false positive for Norfentanyl and Fentanyl?

Some drugs can lead to a false positive for Fentanyl. An example is Diphenhydramine, an antihistamine that is used to treat allergy, hay fever, and the common cold symptoms.

Here are some of the most popular brands containing diphenhydramine:

However, you’ll only test positive for Fentanyl if the drug screen detects diphenhydramine at 20,000 ng/mL. So if you’re taking any of the medications listed above, make sure that you follow your doctor’s prescription. Additionally, if you’ll be undergoing a fentanyl drug screen while taking this drug, it is best to bring your prescription and show it to the technician who will do the drug test.

Want to know more about Norfentanyl and Fentanyl? Visit the Ovus Medical Blog. We have a wealth of information you can benefit from.