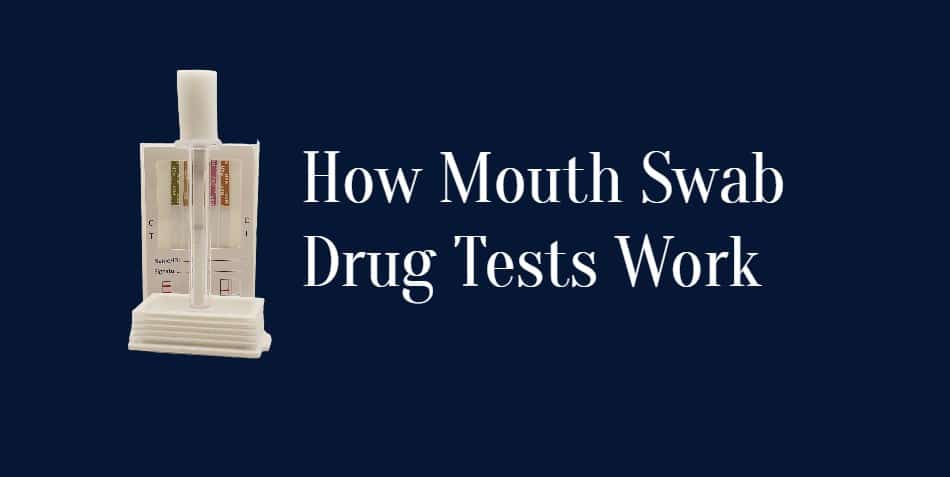 In this post, we look at how mouth swab drug tests work. Saliva drug tests are a convenient option at your disposal in the fight to keep U.S. citizens safe and healthy.

According to the CDC, in 2018, almost 12% of people aged 12 and above reported past-month illicit drug use. And that same year, close to a million Americans aged 65 and over had some form of a substance use disorder (SUD). These startling figures illustrate that drug experimentation, dependence, and addiction are rampant and affect all ages.

Catching a drug problem early can make all the difference when it comes to long-term lifestyle outcomes, including at the community level. Drug testing has a big part to play because a failed test can lead to much-needed interventions that can have many positive ripple effects. With that in mind, here is what you need to know about saliva drug tests.

What Are Saliva Drug Tests For?

Along with urine drug tests, saliva drug tests are a handy point-of-care aid to detect the presence of drugs in a person’s system. They are used in law enforcement, rehab programs, corporate environments, schools, and homes. Because they can detect recent drug use, they are ideal for investigations of accidents, in cases of erratic behavior, and before employees embark on specific safety-sensitive jobs.

What Are the Advantages of Using Saliva Drug Tests?

Mouth swab drug tests have a lot going for them, including that saliva is always on hand and accessible. Saliva tests are also affordable.

They are one of the least invasive drug testing methods. There is no painful blood draw, and donors don’t have to potentially pee in front of a technician.

The collection of samples and their transport is hygienic and straightforward. Unless you can see blood in a sample, it’s completely safe to handle.

You may be able to test for the parent drug and not just its byproducts.

Our test is unlike other oral fluid drug tests, which require tubes to be filled with saliva. Instead, a stick with an absorbent swab end has to be swept around inside the mouth. So if the sample donor has drug-induced dry mouth, as in some cases of stimulant use, it doesn’t matter as much.

Because privacy is not necessary when a saliva drug test is administered, it’s much less likely for saliva samples to be tampered with or diluted. This ultimately saves time and resources.

They are capable of testing very recent drug consumption with approximately 99% accuracy. Working with this short timeframe is something urine drug tests are not able to do. This makes oral fluid tests useful when drug use is suspected of taking place as recently as a mere half an hour before.

What Do Saliva Drug Tests Look For?

Different tests may include other numbers of panels. Each panel can detect an additional substance. For example, our saliva drug tests can indicate the presence of the following ten drugs: 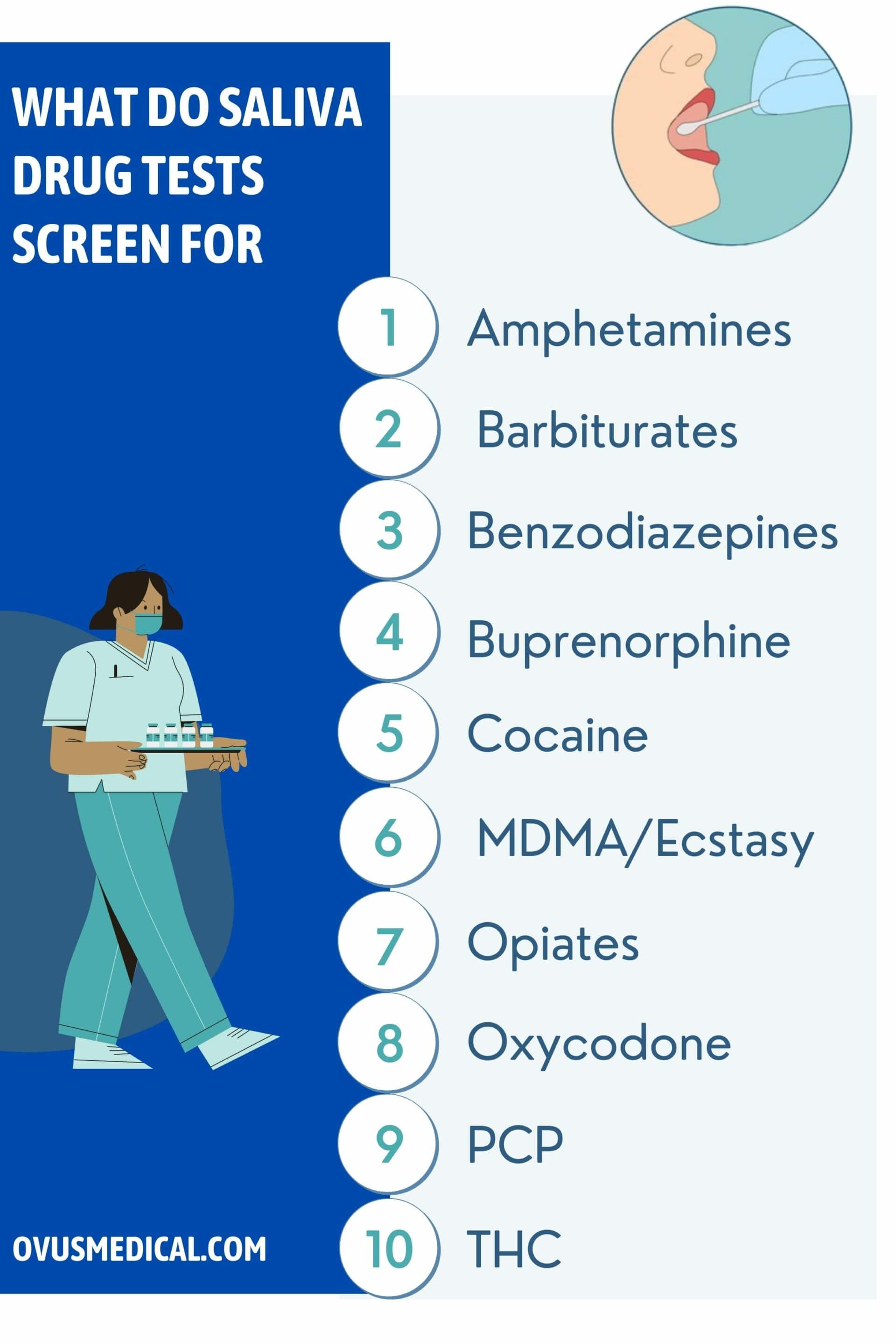 Saliva drug testing has been taking place for almost a century. This is because your saliva gives lots of clues about what is in your blood.

Drugs ingested or smoked, such as alcohol, cocaine, marijuana, meth, and PCP increases the odds of a positive qualitative saliva test. But this route of administration interferes with the results of quantitative tests that indicate just how much of a drug is in your system.

How to Do an Oral Fluid Test

Unlike with other kinds of drug tests, there’s no real pre-planning that needs to take place. From at least ten minutes and ideally half an hour before giving a sample, we recommend that donors refrain from eating, drinking, and chewing gum. This is to ensure that the oral environment is in the best state for testing. Drinks such as milk, soda, and coffee can disrupt the process and cause false negatives or false positives.

The collection stick and test tube are packaged optimally to protect and preserve the test’s contents, so you should only open the packaging when you’re ready to test. When testing, the swab should be at room temperature.

Using something like an alcohol-based mouthwash more than half an hour before a test shouldn’t affect the result.

It’s that quick (just three minutes) and easy! Be sure not to wait as long as 20 minutes, or the results may be affected. Results can be confirmed and further analyzed at a lab if necessary, and this should take about a day or two.

Positive saliva tests may be followed by or used in tandem with urine drug tests to further enhance efficacy.

Oral swab tests can produce and display results in less than fifteen minutes. So, yes, they are as good as instant, which is why they are so well-suited to tasks like roadside intoxication checks.

Drugs show up in saliva pretty quickly after they are consumed. In general, you can find a drug in saliva within minutes of using it. For many drugs, the window of detection is similar in both saliva and blood.

One of the main drawbacks to a saliva test is the short window of detection. Drugs linger longer in urine. For example, angel dust can be found in pee for up to two weeks, and weed can be found a month after use.

How long various drugs remain in a person’s system depends on multiple factors including:

There are nuances. Someone who has developed a tolerance for a drug could clear a drug faster and have a shorter window of detection. But this may be countered by a high frequency of use.

Depending on the drug taken, detectability in saliva could last for two hours to 72 hours after the last use. The window can expand depending on the factors highlighted above.

Knowing the timelines for certain drugs can help your approach to drug testing.

Bear the following information in mind for these three commonly used drugs:

A swab test for drugs has many purposes. If you suspect that a loved one, employee, or rehab facility resident recently consumed substances, oral fluid tests can rapidly pinpoint the drug of choice. Amid the opioid epidemic, a saliva test’s ability to find evidence of opiates can set crucial treatment in motion.

Our point-of-care (POCT) oral mouth swab drug tests are FDA-approved, available at major retailers such as Walmart, and they simplify routine screenings.