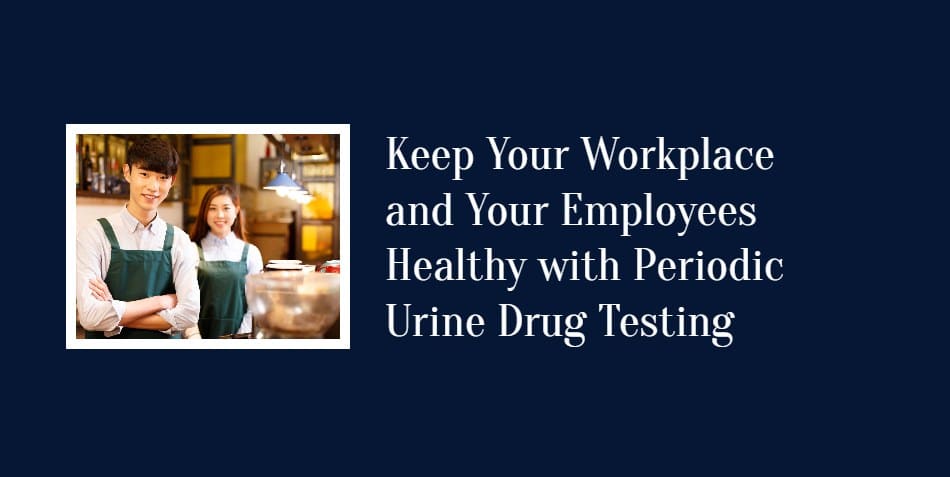 Periodic Urine Drug Testing  – From humanity’s earliest days, there have always individuals. Who recklessly abuse substances that can have adverse effects on their health and behavior. Throughout known history, people have used naturally occurring foods and beverages. Even processed products such as alcohol for medicinal purposes, social purposes, and often for recreational purposes.

Technology has radically multiplied the number of drug substances available to mankind especially with the flourishing of pharmaceutical research. Inevitably, the abuse and misuse of mind-altering substances caused problems. To the point that government and other institutions of authority needed to enact. Enforce policies to curb this growing worldwide phenomenon.

In the United States, the drug menace and the moves to curtail. It not limited to concerns of criminal and illegal activity associated with the manufacture, traffic. Use of drugs and similar substances. There is grave concern about the safety, health, and well-being of people in schools, on the road, in the workplace. Which is probably the most inappropriate scenario for people under the influence of drugs.

Contrary to what some sectors still believe. The profile of a drug user is no longer that of a law-breaking hippie. Who bent on self-destruction. America’s drug users today are upright family people with good jobs, children, education, and lives. That are much more complicated or stressful than ever before and with easier access to substances. That could help them handle things.  Some of these people may not even be aware that their behavior qualifies them as drug users.

People believed to under the influence of harmful substances. That can tested by various means including straightforward clinical examination of signs and symptoms. Motorists suspected of driving under the influence (DUI) of alcohol can be immediately checked for blood alcohol levels with readily available equipment such as breathalyzers that some police squad cars are equipped with.

In the industrial setting however, it is often much more than alcohol abuse that managers, human resource practitioners, safety personnel, and industrial health workers are concerned with. There are many more drugs, both medicinal and illegal. That people in the workplace known to using or misusing. Determining whether a worker is under the influence of such substance. Has taken the substance recently can determined by subjecting samples taken from the suspect to laboratory assay. Such lab tests will work on blood, tissue, hair, saliva, and urine.

It is evident that the most convenient and least obtrusive sample to use for drug testing is urine. For this reason, urine drug testing has become the practice in workplaces throughout the country, most especially in scenarios where having workers who are under the influence of potentially harmful drugs is unacceptable. Such scenarios include defense and security situations, mass transportation especially piloting aircraft, healthcare, construction and manufacturing sites. Sensitive positions like government agencies.

Today’s state-of-the-art urine drug testing easily conducted onsite by having employees. Drug abuse suspects urinate into a multi-panel drug test cup and running and interpreting the test according to the instructions that accompany the product. These FDA-approved urine drug testing kits are designed to give reliable results on the presence of many of the most commonly abused substances from a single test.

Should employees be subjected to urine drug testing?

Various concerns surround the issue of routine drug testing at the workplace. Running pre-employment, pre-deployment, and even routine periodic drug tests on employees. Produces the obvious benefit of ensuring a safe and more productive workplace by minimizing industrial accidents, reducing absenteeism and tardiness, and increasing the proficiency level of workers by ascertaining that they are drug-free. Helping employees be free of drugs also helps them in their personal lives outside the workplace by promoting physical and psychological health, keeping them out of trouble and family conflict, and even relieving them of an unnecessary financial burden that could be present due to the drug purchase and habitual use.

On the other hand, there arguments put forward against workplace urine drug testing, citing mainly that it is an invasion of people’s basic privacy, and therefore a violation of their rights. Among the contentious issues brought up when routine urine drug testing considered at the workplace is that an inaccurate or misleading test result could unfairly stigmatize an employee and subject him to the injustice of humiliation and further psychological problems.

For this reason, it absolutely imperative for any urine drug testing kit used in the workplace to  accurate, reliable, and easy for the health worker or operator to defend if ever the results contested. Abiding by the explicit instructions that accompany the urine drug testing cups provides the necessary quality control to ensure this much-needed precision.

Check out the Ovus Medical blog site to learn more about cutting edge drug testing kits that have become the industry standard.