Ketamine Side Effects You Should Know 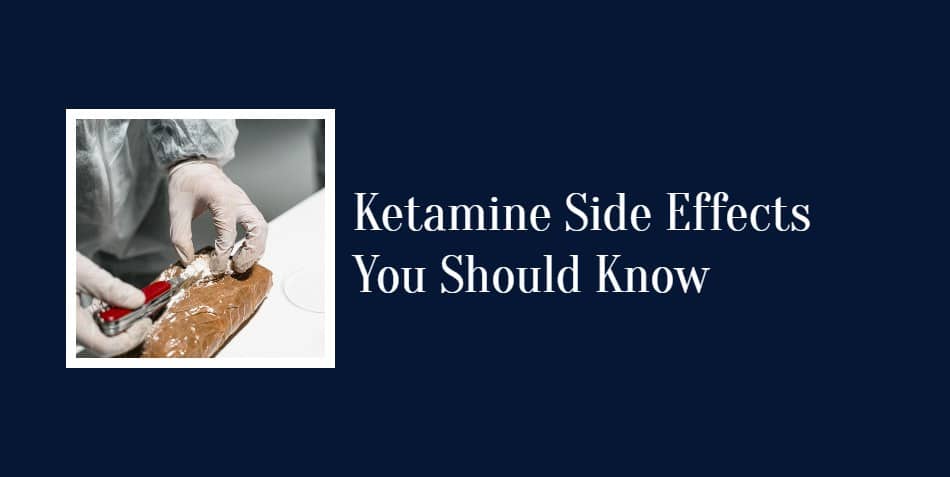 Ketamine is a drug that has drawn a great deal of public attention due to its reportedly high value in the clinic and operating theater. It has also generated a great deal of controversy due to its high potential for abuse as a street drug. It reportedly gives rise to severe symptoms, as experienced by unlawful users of this product.

Ketamine Side Effects: Proceed with caution

Pharmacologists refer to almost all drugs as “double-edged swords.” They might regard ketamine as a broadsword with very sharp and lethal cutting edges. Ketamine is a medication that has various beneficial uses, most of them in surgery. Doctors use it to make surgical patients fall asleep and suffer no pain during surgical operations.

Because many Americans use it as a recreational drug, often with disastrous effects, it is also on the Drug Enforcement Agency’s watchlist. Criminals administer ketamine to unsuspecting victims to render them senseless and take advantage of them.

Because ketamine is a dissociative drug and a hallucinogen, people who abuse it can go through some unusual experiences. One of the more dangerous ketamine side effects is when the victim loses all sense of reality to the point of being unaware of his surroundings. Abusers call this completely dissociative condition a “k-hole.” Drug users try to induce a k-hole by injecting themselves with large doses. Ketamine abuse can result in harm befalling not only the user himself but also the people around him.

Many claim that ketamine side effects are not as problematic as other drugs. This is why soon after its development, it became the anesthetic of choice in many hospitals. More extensive monitoring has since shown that some ketamine side effects should cause concern. Both patients and illicit users can experience chest pain or tightness. Some observe an unusual heart rate, coughing, and difficulty in breathing or not breathing at all. These incidents need immediate medical attention and supportive therapy.

Blurred vision, sweating, itching, skin hives and rash; bluish lips, fingernails, and skin are but a few of the negative side effects. Some patients have reported urinary problems: frequency in urination, difficulty or pain in urination, and even bloody or cloudy urine.

Others yet complain of difficulty in swallowing, convulsions, dizziness, faintness, muscle weakness, or swelling of the eyes, face, lips, or tongue.

Confusion, hallucination, nervousness and restlessness, disorientation, and even total detachment from reality are other worrisome symptoms.

Most ketamine side effects are temporary. Medical personnel deal with them using simple supportive therapy in a medical environment. When used by criminals as a date rape drug, ketamine can cause irreversible brain damage. This is due to the high doses administered to the hapless victims.

These problems are why law enforcement authorities continue to classify ketamine as a dangerous drug.  It is also why ketamine continues to be one of the substances they check for in routine drug tests. These tests are effective in detecting the presence of abused drugs. They allow for detection through a quick and easy examination of urine place in a single multiple-paneled test cup. Check out the  Ovus Medical Blog to learn more about ketamine and other drugs.