Kratom Effects: Is There Cause for Concern? 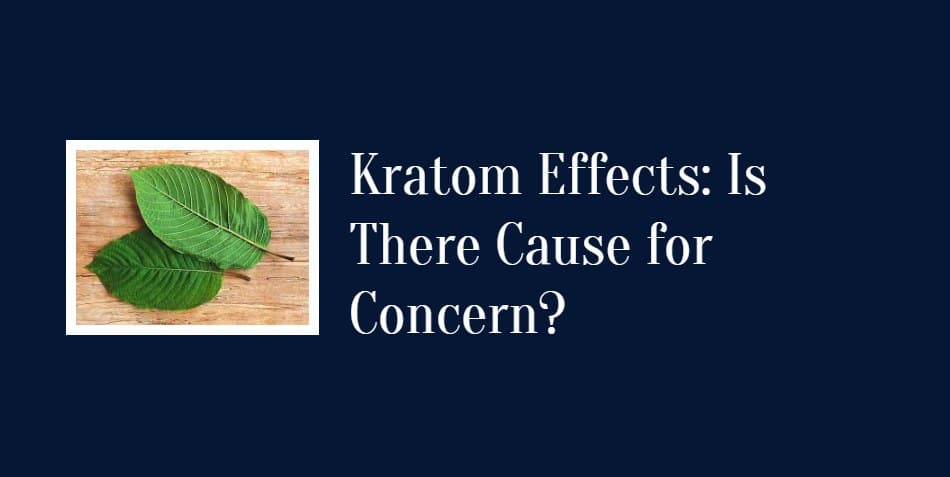 Kratom is a medicinal plant that is endemic to Southeast Asia. Its recent appearance on the American herbal drug scene has been causing quite a stir. The reason for this? It’s because no one seems to know very much about kratom effects. Even the experts, it seems, are being cautious about saying anything about it.

Kratom, a tropical evergreen tree, goes by the scientific name Mitragyna Speciosa. It has long been considered a traditional or alternative herbal medicine in the East. But it only recently began to find its way to North America, where it now appears to be causing much controversy.

At present, the medical science community is hell-bent on getting a clearer picture of the kratom effects. So are the legislators and law-enforcement agencies in the United States. The burning question asked is whether its proliferation as a medicinal agent — or even as a recreational drug — is a cause for concern.

The apprehension over kratom’s use is understandable. There has been an alarming number of reports about many harmful kratom effects on the human body. Many are anecdotal reports of fatalities, albeit those stories come in conjunction with other substances.

Kratom Effects You Should Be Aware Of 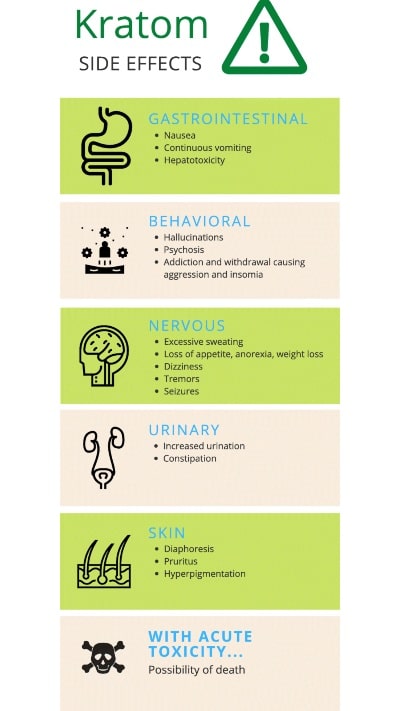 Many Americans who experience chronic pain are looking to kratom as a sort of miracle drug. Long before it reached American shores, it was a huge part of the indigenous healer’s armament for various indications.

Claiming it to be a cure-all, users hail it as a pain reliever, an energy booster, an appetite enhancer, and even a sex stimulant. It also used as an antiseptic, a topical anesthetic, a cough remedy, and an anti-diarrheal. It is a deworming agent and medicine against intestinal infections. Preparations of Kratom relieve chronic arthritis pain, fibromyalgia, and cramps.

In Thailand and other parts of Southeast Asia, kratom was reportedly used as an opium substitute. Drug-abuse patients used kratom to manage their withdrawal from opium. The touchy part about this fact is that kratom itself has a high potential for drug dependence or actual addiction. Healthcare workers need to monitor their charges closely and make them mindful of the risks of substance abuse.

It’s easy to see why a seemingly innocuous nutritional product like kratom can become an overnight sensation. It is tempting for people who seek relief from various ailments to turn to plant-derived substances. Why?

It’s common sense, really: chemically formulated medications, especially pain killers, can do much harm to the body over the long term. They can damage the liver and kidneys, giving rise to even more health complications.

People go the naturopathic route hoping to do less harm to their bodies. Patients are becoming increasingly reluctant to place their health concerns before conventional physicians. Many are also tired of costly and potentially dangerous pharmaceutical products.

From Farm to Pharmacy

Although kratom often still consumed in its raw form (which is leaves taken off the tree), it has found its way into American homes and medicine cabinets in various other forms. Dried leaves processed into easily-used powders and even into tablet or capsule form for people who more accustomed to the convenience of merely swallowing pills.

You would chew and eat fresh kratom leaves as you would any leafy salad green to experience kratom effects. Leaves are also often dried and steeped in hot water like a tea or herbal decoction. Dehydrating the extracts results in a much more concentrated powder. This allows for the manufacture of capsules and pills, as mentioned earlier, that provide an effective dose with a single pop.

Botanical studies of kratom identify several varieties of the plant. There are green, white, red, and yellow-veined variants of kratom. However, the Thailand-grown Maeng Da kratom is touted as the most potent variety, requiring smaller doses to elicit the same effect on the body. Whether this variant exists in nature, is a result of genetic engineering, or is simply a construct of a marketing ploy is truly anyone’s guess. 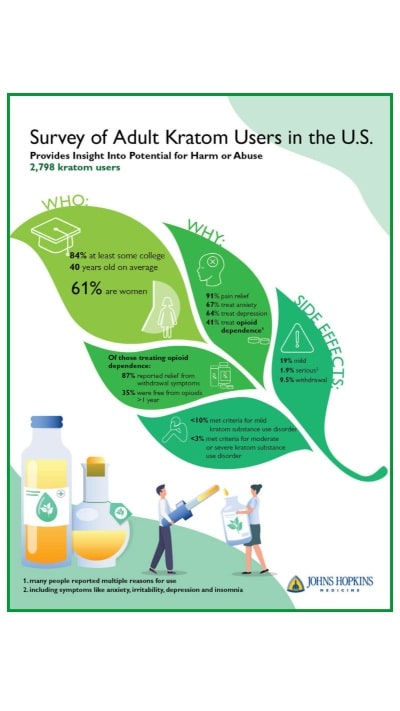 As in the case of any food or drug product that lacks thorough documentation, Kratom is still regarded with suspicion, as should the case. It should used with a healthy degree of caution.

The public attention that kratom has received in recent years is not entirely due to its seemingly miraculous effects. There is a body of evidence that points to the negative or harmful effects of the herbal product.

Recently published data by the American Association for the Study of Liver Diseases, for instance, revealed evidence of kratom causing liver toxicity and severe hepatic injury. With such cases notably on the rise in the U.S., it’s no wonder the use of this popular herbal product is still very much in question.

Kratom has its list of contraindications and possible negative physiological experiences and effects. These include nausea, itching, constipation, hallucinations, and loss of appetite. There’s sweating, increased urination, constipation, runny nose, and muscle and joint pain. Others experience dry mouth, and even events as alarming as anorexia, psychosis, and seizures.

There’s little hard data to ban Kratom’s use, but some countries have still imposed government-sanctioned bans on such products. These are typically the same countries that have difficulty enforcing bans on illegal drugs of any kind.

The United States Food and Drug Administration has not approved kratom for any medical use. Any stocks illegally imported are subject to confiscation. Pressure from both sides has generated controversy. Regulatory agencies aim to impose public safeguards. The drug industry, meanwhile, is lobbying in the opposite direction.

The many controversies related to Kratom have kept law-enforcement agencies and the U.S. healthcare sector on the fence. We’ve worked to ensure that current data is available via our Ovus Medical blog.

We aim to foster public safety while helping people access potentially beneficial medicines. For this reason, we shall continue to provide current information on this drug through a series of articles.

Does Kratom show up on a drug test?