Sinclair Method Success Rate: Can This Be the Cure for Alcoholism? 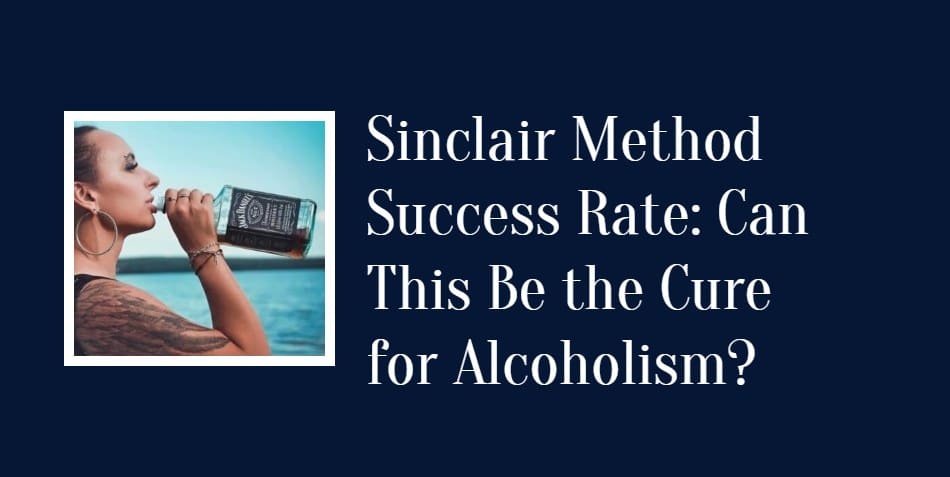 SAMHSA reported that approximately 14 million American adults suffer from alcohol use disorders or alcohol dependency. The number of people seeking treatment for alcohol-related problems increases by 1.5 million every year. Since naltrexone became the second FDA-approved drug as a treatment for alcoholism, it demonstrated a high Sinclair Method success rate today. Can this be the cure for alcoholism? Read on to find out.

What is the Sinclair Method?

The Sinclair Method is an evidence-based approach for treating excessive drinking. Alcohol abuse treatment like this is far different from other treatment programs that require abstinence from alcohol. This treatment does not intend to prohibit alcohol consumption but rather to disrupt the pleasure associated with drinking.

In this method, patients take naltrexone an hour prior to drinking alcohol. Naltrexone is a nonaddictive drug and has no adverse effects when combined with alcohol. Instead, as naltrexone absorbs into the system, it blocks opioid receptors in the brain. Thus, alcohol doesn’t cause you to feel the pleasure that drives you to drink excessively.

The proposed method will prevent the reinforcing effects caused by alcohol consumption by preventing endorphin release. Findings that alcoholics experience more opioid activity when drinking supports the validity of this concept.

What do statistics say about the Sinclair Method?

The official report on the Sinclair method’s success rate is at 78-80% on average in actual scientific studies. There is strong evidence to support the claim that this treatment reduces relapses to excessive drinking, alcohol consumption frequency and quantity, and alcohol craving in people who drink heavily.

Additionally, statistical data on a separate study reveals clear and consistent evidence that naltrexone helps patients who cannot remain abstinent to reduce their drinking behaviors. As a result, they drink less frequently and in smaller quantities, avoiding a full relapse. Thus, this treatment has been beneficial, especially during the early stages of recovery.

The study also found that extended use of naltrexone is beneficial since it can prevent alcoholics from falling into a self-destructive cycle where one drink leads to another. More so, treatment for 6 to 9 months can be more effective than short-term treatment of 3 months to eliminate alcohol cravings.

How effective is Sinclair Method?

A study reported by PubMed provides excellent data to understand how effective Sinclair Method is. Evaluators assess 120 alcohol-dependent individuals conducted at multiple sites. In this experiment, each patient received 50 mg of naltrexone orally for 12 weeks. Patients were seen twice a week and received counseling at the same time.

In 12 weeks of treatment, out of 120 test subjects, only 54% of them completed the entire program. However, a great deal of evidence shows that almost 86% of participants consumed less alcohol than their baseline drinking. Also, nearly 39% of the patients who completed the course abstained from drinking.

Based on the Obsessive Compulsive Drinking Scale, the significant decline in cravings reduced alcohol consumption by week 12. Moreover, there were no severe adverse reactions reported with naltrexone use.

The researchers concluded that the data strongly suggest natural opioid activity controls alcohol intake and that blocking opioids reduces the craving for alcohol. Most of them believe that opioid antagonists such as naltrexone are effective in treating alcohol dependency. In addition, it prevents relapse and reduces alcohol consumption.

What is the percentage of success for the Sinclair Method?

A 78-80% success rates represent 1 in 10 patients who refuse or cannot follow the prescribed medication. However, the success rate is closer to 90% among 100 patients if assumed no issues with dosing protocol compliance.

Naltrexone’s side effects are why some alcohol-dependent individuals cannot comply with taking the medication dosing protocols. It has a contributing factor to nausea and vomiting. Other less common side effects include headaches, dizziness, fatigue, or insomnia. However, these effects are usually mild, usually occur only once, and resolve within a short time after dose stabilization. 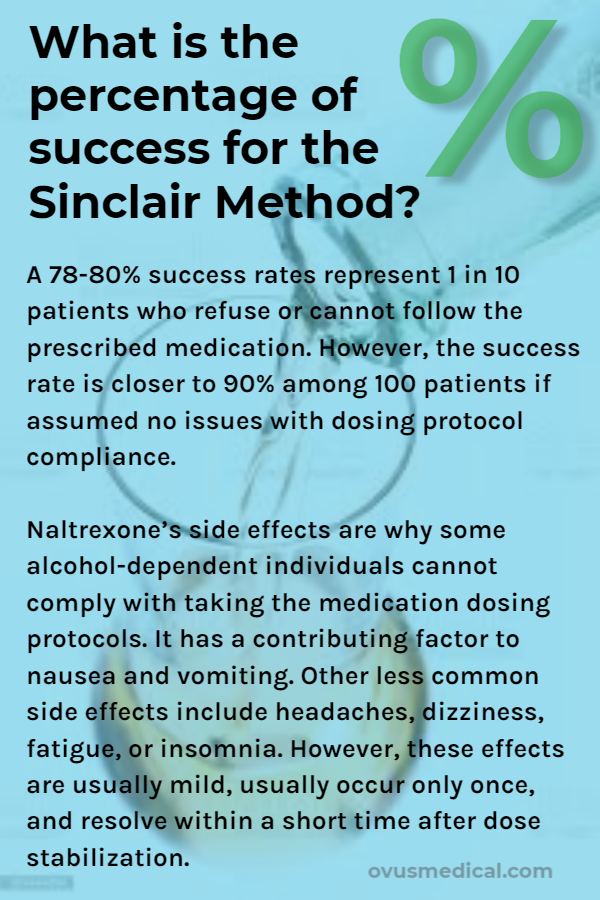 Sinclair Method Success Rate: Can This Be the Cure for Alcoholism? Even though this method has shown a reasonable success rate, it can’t necessarily remove the desire to drink alcohol. However, long-term treatment shows excellent results in reducing relapses for excessive drinking and prevention for alcohol cravings. As such, this has a great potential to help healthcare providers better use this medication for alcohol-dependent patients.

You can learn more about this and other related topics on Ovus Medical’s Blog. And if you’re looking for affordable yet superior quality alcohol and drug testing kits, check out Ovus Medical’s Panel Drug Test Cup w/ ETG or ETG Test Strips now!