What is the Drug Molly?

by Liberty | Feb 26, 2021 | Blogs, Do You Know What Causes Low Creatinine Levels in Urine Drug Test? 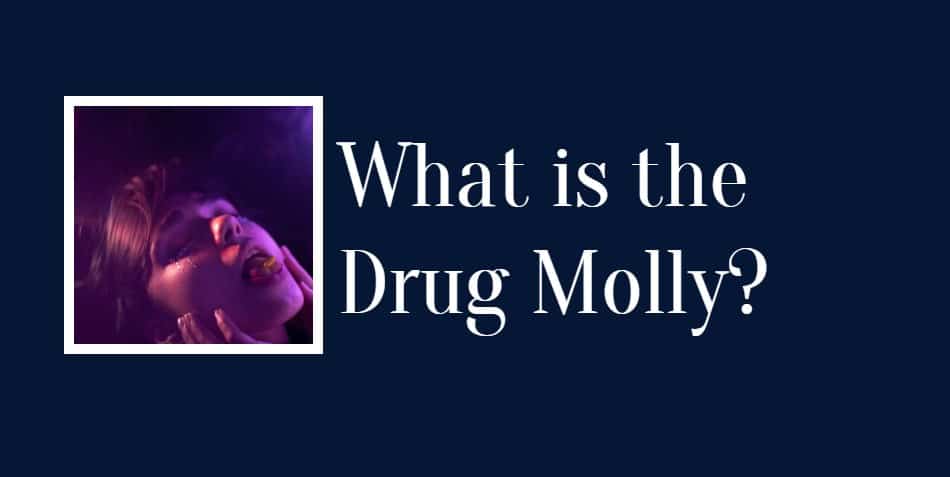 3,4-MethyleneDioxyMethAmphetamine, also known as MDMA and Molly, is the world’s most popular synthetic drug of all time. This psychoactive drug makes you friendlier, euphoric, and feel empathetic towards others. That’s why MDMA became a famous party drug among young adults. It makes you feel so alive, energetic, and super friendly – feelings that many perceive as musts to enjoy the party.

What is the drug Molly?

No, “Molly” isn’t the name of MDMA’s inventor. The name came from “molecular,” which is how this drug was originally distributed – in powder or crystal form.

Today, it comes in the form of capsules and funny-looking tablets. Sometimes, it’s also available in its liquid form.

It’s a Schedule I substance which means it has a high chance of being abused but has no FDA-approved medical use.

Although most users typically swallow Molly, some smoke, snort, or inject this illegal drug.

How does Molly work?

Ecstasy triggers three neurotransmitters in your brain: Dopamine, Noradrenaline, and Serotonin. The first ups your energy level, the second increases your heart rate, while the third improves your mood, appetite for food, and sex.

The thing is – Molly mimics these neurotransmitters, giving you that enhanced experience most users love. It makes you feel so good and happy, and you see everyone as your friend.

Side Effects of Molly

When used as directed, MDMA can be a helpful drug. But when used for recreation or as a party drug, you must be very careful.

For one, MDMA disrupts the sleep cycle, so you’ll feel sleepless after taking it. You might feel your teeth clenching involuntarily, even when you’re wide awake. Another side effect is being too amiable and friendly, even to strangers. Now, this can lead to unsafe sex or promiscuity.

MDMA’s real danger is not in the substance itself. In fact, Dr. Alexander Shulgin, the spiritual father of psychedelics, recreated MDMA for therapeutic purposes.

It’s when someone contaminates it with other drugs like cocaine or ketamine or mixed with chemicals used for bath salts that can cause adverse effects like:

According to the National Institute on Drug Abuse, using Molly in places where there’s long, vigorous physical activity in warm environments can lead to molly’s most acute side effects – a significant increase in body temperature or hyperthermia. This can also cause dehydration.

However, drinking plenty of water and sports drinks is not the solution in this situation. Molly causes the body to retain water, so there’s a risk of electrolyte imbalance or brain swelling.

This may be the reason why fatality reports in recent years have tended to cluster at events such as raves and electronic dance music festivals.

Is there a need to test for MDMA in the workplace?

Most companies that do drug testing in the workplace now include molly screens. This drug, as mentioned earlier, affects a person’s perception and behavior. So employers are wary that their employees’ productivity and safety might be affected by a worker who’s still experiencing a comedown because he took MDMA the night before.

Does your workplace need reliable but affordably-priced MDMA drug tests? Then check out Ovus Medical’s 10, 12, 13, and 14 drug testing cups which include MDMA. Or purchase our MDMA Testing Strips. 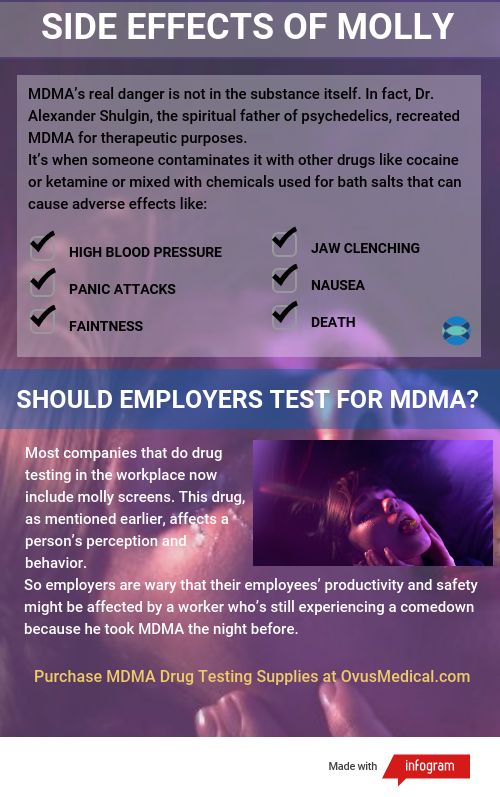