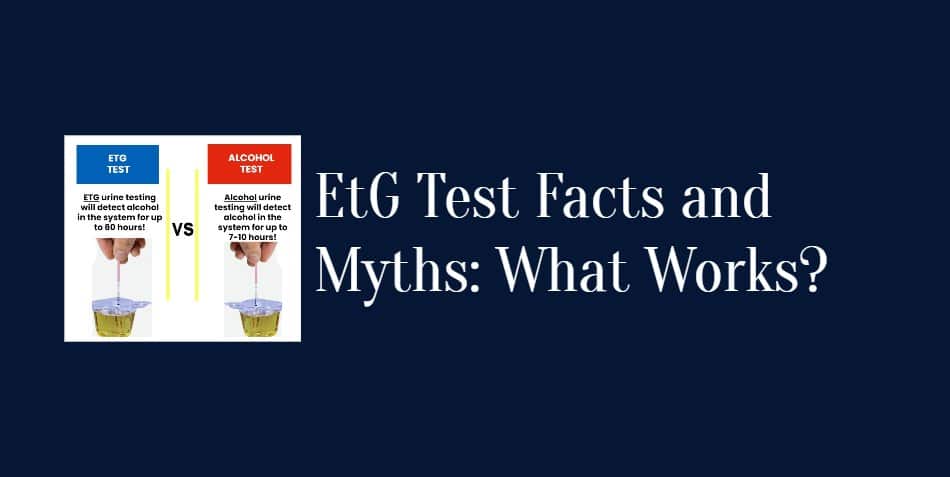 Whether you’re a rehab owner or the person responsible for performing drug testing in workplaces, knowing EtG test facts and myths can help you out. It can help you create better testing procedures, guide your patients or employees, and make sound judgments accordingly.

But what are some of the EtG test facts and myths out there? Read on and find out.

EtG Test Facts and Myths You Should Know

Fact: While both urine and oral fluid drug testing are valid test methodologies, they have some biological differences and yield different results.

For example, drugs, particularly THC, remain in oral fluid for a shorter period of time and in lower concentrations than in urine.

As a result, if you take urine and oral fluid specimen from the same donor simultaneously, they may not correlate, which means one could be positive and one negative.

Fact: Although alcohol has a caloric value, research has shown that drinking does not cause considerable weight gain in males and may even cause moderate weight loss in women.

In reality, according to research published in the Journal of Nutrition, beer drinkers have no more body fat than non-drinkers.

Weight gain is more likely to be caused by lifestyle and genetics.

Myth: In comparison to mixed drinks, beer and wine are less intoxicating

Fact: A regular glass of wine, a bottle of beer, or a shot of whiskey, or similar intoxicating drinks have the same amount of alcohol in them.

As a result, a 12-ounce can of beer, a 4-ounce glass of wine, or a standard mixed drink or cocktail are all equally intoxicating and provide the same BAC reading on a breathalyzer.

Myth: Coffee is a rapid method to sober up

Fact: Alcohol leaves the body at a rate of about.015 percent BAC per hour, and coffee does not affect that rate.

Even if you drink coffee, if your blood alcohol concentration (BAC) is.015 percent, it will take an hour to eliminate the alcohol from your system.

Only time influences this rate, not gender, age, or weight.

Myth: Alcohol consumption during pregnancy can cause Fetal Alcohol Syndrome

Fact: Light drinking by expecting moms does not produce Fetal Alcohol Syndrome, which causes mental and physical impairments, according to extensive medical research involving hundreds of thousands of women worldwide.

Nonetheless, the US Surgeon General advises expectant moms to avoid alcohol while pregnant to be safe.

Myth: The root of alcoholism is alcohol

Fact: “Alcohol does not cause alcoholism any more than sugar causes diabetes,” according to the Florida Bureau of Alcoholic Rehabilitation.

According to FBAR, if alcohol was the cause of alcoholism, everyone who drank it would be an alcoholic.

In reality, only a small number of persons who use alcohol are considered to be alcoholics.

People are often born with an inclination to alcoholism, according to Alcoholics Anonymous.

Alcoholism cannot exist without the ingestion of alcohol, yet the causes of alcoholism may be more complex than merely drinking.

Fact: The morning after you drank a little too much alcohol, you might feel a little dumb, but it’s not because the alcohol damaged your brain cells.

In truth, alcohol has little influence on the brain’s cell life cycle.

Furthermore, experts have shown that red wine benefits the brain and can help to prevent or delay dementia in later life.

Fact: Sulfites are a natural result of the fermentation process that can be found in all wines, including those labeled “No Sulfites.”

Sulfites can also be used to safeguard the color and delicate flavors of wine by inhibiting the growth of undesirable microbes.

Unlike in Europe, the United States compels winemakers to display sulfite warnings on bottles because sulfites can induce allergic reactions in some people, particularly asthmatics.

Wine headaches are more likely to be caused by tannins or histamines, which are found naturally in wines.

However, the source of wine headaches is still a point of contention among scientists.

Fact: Restricting alcohol availability to combat alcoholism has not shown to be a viable policy, as seen in the United States and other nations during Prohibition.

Alcohol prohibition can have significant unexpected consequences, such as poisoning from tainted illegal alcohol, substance misuse, higher crime rates, economic damage from lost tax income, and many other societal evils.

Fact: In a way, yes. Alcohol will widen the blood vessels in your skin and warm you up if you’re already warm and cozy. However, in cold areas, the effect is just the opposite. Your body limits the blood supply to your skin and lowers your body temperature to conserve heat. Therefore, excessive alcohol drinking is severely low temperatures can potentially result in hypothermia.

Myth: By sucking on a penny, you can pass a breathalyzer test

Fact: It should be so simple – and cheap – to fool a breathalyzer!

Unfortunately, placing a copper penny under your tongue does not affect the results of a breathalyzer.

Other purported elixirs, such as breath mints, herbal formulas, charcoal pills, and – possibly – snake oil, do not work either.

It’s better to be prudent – and safe.

These are just some EtG facts and myths. There are more misconceptions out there. If you want to know more about this topic, visit the Ovus Medical Blog. We have a wealth of information that can help you out.