What Is Alcohol Testing? 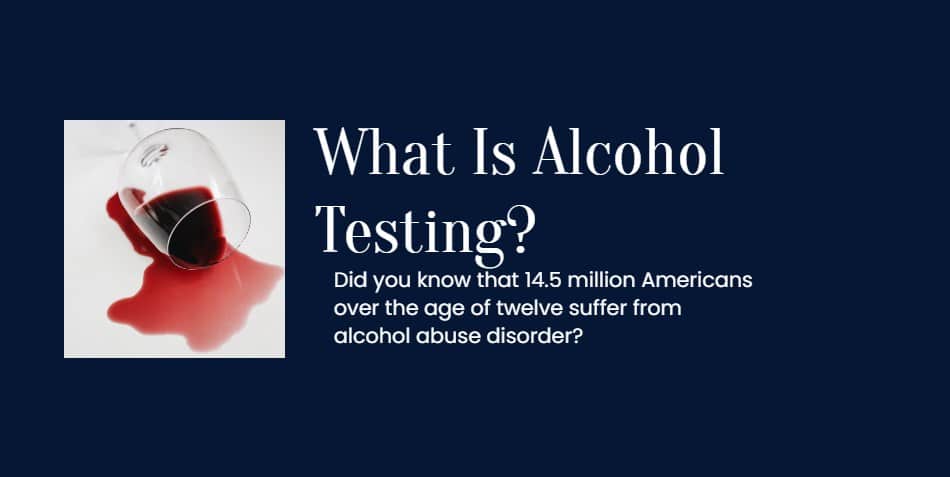 Did you know that 14.5 million Americans over the age of twelve suffer from alcohol abuse disorder? Sadly this disorder is often just as harmful as drug addiction. As such, it’s important to identify it with testing and treat it. The good news is that individuals can now take a drug and alcohol test to make sure they’re staying clean. But what exactly is alcohol testing? If you want to learn more about this type of testing, then you’re in the right place.

In this article, we’ll dive into some of the different aspects of alcohol testing. For example, we’ll explore the difference between a traditional alcohol urine test and an ETG alcohol test.

We’ll also discuss the various tests and forms you get them in (like alcohol test strips and an at-home alcohol test). That way, you know which form works best for your specific needs. Let’s get started!

Difference Between Alcoholism and Alcohol Abuse

You can learn more about AUD by visiting this resource here. However, alcoholism is different from alcohol abuse. Not everyone who drinks is an alcoholic. Many may be what’s referred to as “problem drinkers.”

These are individuals who engage in alcohol abuse but have not yet developed physical dependence. This is an important distinction because it’s much easier to help problem drinkers before they enter the alcohol use disorder stage.

What is Alcohol Screening and Testing?

Alcohol screening and testing are two essential methods of undergoing treatment toward problems surrounding alcohol. Alcohol screenings are questionnaires that are taken by the individual in question.

They are designed to provide psychological and behavioral questions surrounding the person’s drinking. A professional will then talk to the individual about their screening results. What follows is a frank conversation about alcohol and a discussion of potential treatment options.

It’s important to note that nothing is forced on the individual. For it to work, the person needs to decide for themselves. While it might not seem viable, the reality is that this type of alcohol screening can reduce people’s problem drinking by 25%.

In addition to screening, professionals may also use alcohol testing for people who are undergoing treatment. This is a test used to detect the presence of alcohol in either the urine, blood, or saliva.

What Are Some Reasons For Administering a Drug and Alcohol Test?

There are a variety of reasons why someone might want to administer an alcohol test on someone. The first is for people in treatment programs. For example, a healthcare professional might be suspicious that their patient is drinking again.

When this happens, they have a right to ask the person to take a test. Another reason is for employers. Many types of jobs can’t have someone with an alcohol problem on the team. It’s often a legal liability.

As such, an employer has a right to administer an alcohol test on new employees as long as they disclose this. The same goes for current employees who might begin drinking on the job. Finally, parents might want to administer these tests to their kids if they suspect that they’re drinking.

This is often done to curb problem drinking before it becomes serious. Here are some other situations where an alcohol test might be appropriate:

How Long Does Alcohol Stay in the System?

The amount of time that alcohol stays in your system depends on your metabolism. Typically, it takes the average person one hour to metabolize one unit of alcohol (one unit here is defined by eight grams of pure alcohol). However, not everyone metabolizes alcohol the same way.

This is due to factors like gender, weight, the amount of food consumed beforehand, and medications the person might be taking. So, for most people, once they stop drinking, it takes alcohol twelve hours to leave their system.

Now, unfortunately for testers, this doesn’t leave a large window in which you can check the system for alcohol. However, the good news is that certain tests can detect the presence of alcohol metabolites.

Specifically, these types of tests look for Ethyl glucuronide (or EtG) and Ethyl sulfate (or EtS). These two metabolites can remain in the system for between eighty to ninety-six hours after alcohol consumption.

As such, looking for them gives testers a much larger window to check for potential alcohol abuse. However, it’s important to note that alcohol use disorder can affect these metabolites. If a person isn’t an alcoholic, then metabolites like EtG don’t stay in their system for as long.

What Are the Different Types of Alcohol Testing?

Four main types of tests are used for detecting alcohol. These include a urine test, breath test, saliva test, and blood test. In this section, we’ll briefly describe each of them and the different uses they have.

Urine tests are usually preferred because they come with an extended test window. As long as it’s an EtG test, alcohol can remain detectible in the system for up to four days. This method uses alcohol test strips which you dip into the urine.

A chemical reaction in the form of a color change will indicate whether or not the person tested positive. Make sure to check out our fourteen-panel drug test that checks for EtG.

The alcohol breath test, also known as a breathalyzer, is one of the most popular testing methods. This is because it can be easily used by professionals in the field, like traffic officers, during drunk driving incidents.

The device works by oxidizing any alcohol on the breath sample. This trips an electric current which then displays an individual’s BAC, or blood alcohol content. The only problem is that it can only detect alcohol for six to twelve hours after ingestion.

The saliva test is also done with a test strip. These strips contain chemicals that change color when they react to alcohol. The big benefit of this method is its quickness. It’s one of the fastest alcohol tests.

However, like some of the other methods, it doesn’t provide a great time window for testing.

Blood is another fairly inefficient method of testing since alcohol doesn’t stay in the blood for more than twelve hours. In addition to this, it’s also painful to draw a sample, and it doesn’t detect any metabolites, like EtG.

The only plus side is that it’s one of the most accurate methods of testing when it’s done shortly after alcohol consumption.

Which Type of Alcohol Testing Is Best?

As you can see, the right type of alcohol test depends a lot on your needs. For example, if you’re a police officer, then it just makes sense to use a breathalyzer over the other testing methods.

However, it’s widely believed that the urine test is the method of alcohol testing. Specifically, EtG urine tests can pick up on metabolites. The main reason for this is the long time frame for detection.

Twelve hours after use isn’t a long enough detection period for most types of uses, besides criminal traffic stops. In many cases, these types of tests can require planning to catch an individual in the act.

This, in turn, can negatively affect their health and chances of recovering from a relapse. Urine tests, on the other hand, provide roughly four to five days to check.

As such, you don’t need to wait for the individual to relapse again. On top of that, they give instant results after you dip the strips in. As such, they are our choice for the best type of alcohol testing.

We hope this article helped you learn more about alcohol testing and how it can help individuals struggling with abuse or addiction. As you can see, this type of drug and alcohol test is a necessary precaution for many employers and healthcare individuals.

However, you must get alcohol test strips from a supplier that you know you can trust. So how do you find one? Simple: look no further than Ovus Medical.

We believe in creating a safer community by offering the best alcohol and drug testing methods on the market. If you want to learn more about the different types of tests that we provide, then make sure to contact us today.