How to Get a False Negative on a Drug Test 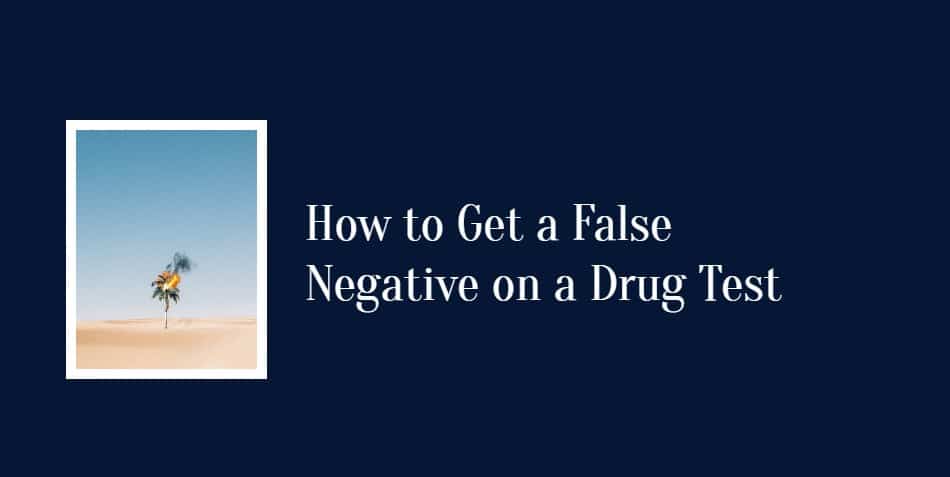 An erroneous result on a drug test may be the proverbial Holy Grail of drug abusers. But, conversely,  it is the worst nightmare of drug-free people. Who are tested positive for illegal substances. At the same time, it is the bane of healthcare and law-enforcement authorities tasked with addressing the problem of substance abuse. How to get a false negative on a drug test? Read on.

What is a False Negative?

A false-negative result is simply a test that failed to accomplish the only job it was tasked to do, which is to detect the presence of an illegal or abused substance in the urine sample taken from a drug abuser. Such a bogus result could allow a drug abuser to thwart the law by beating a drug rap, gain access to places or jobs. He would otherwise barred from, and various other things. That law aims to keep drug-free for both legal and practical reasons. It could also unjustly get a guiltless test subject in serious trouble.

The sad reality is erroneous tests do happen every now and then. These incorrect readings could the result of a number of isolated or even combined reasons. They could be caused by activities the test subject had been engaged in, including the ingestion of other substances, prior to providing a urine sample for testing. It could the intended result of tampering, doctoring, or fudging the test results to produce the desired result. They could be the result of accidents, carelessness, or simply incorrect procedures of running the tests. Worst of all, the flawed result could simply be the result of using a flawed test kit.

How to Get a False Negative on a Drug Test?

Finding out how to get a false negative on a drug test is what people are in search of to help them pass a pre-employment drug test, avoid prosecution, or some other purpose. Accelerating the natural substance removal processes from the body by increased physical activity or even flushing. It out by drinking a lot of water along with some diuretics or laxatives may be of some help but these are never sure-fire solutions.

There is also a plethora of purported formulas, tonics, kitchen remedies, or herbal preparations. That purportedly help with the removal of illegal substances. But again, there is no real evidence to support their effectiveness. Reducing the detected level of amphetamines in urine samples by drinking low pH or acidic substances like vinegar is also resorted to by drug users trying to find out how to get a false negative on a drug test.

On the other end of things, there are also known substances one should avoid. Before taking a drug test because these substances could also show up as false positives. These include over-the-counter medications such as the decongestant phenylpropanolamine, the antidepressant sertraline, or the cough remedy dextromethorphan, or even that innocent bakeshop muffin with a sprinkling of poppy seeds on top. Poppies are, after all, the source ingredient of opiates and the entire family of drugs derived from them.

While urine testing kits are distributed with easy-to-follow instructions for the operator to follow when conducting drug tests, mistakes can and do happen from time to time. These can be due to negligence or carelessness on the part of the operator or laboratory personnel. Who may inadvertently cause contamination or adulteration of the sample. Due to plain and simple failure to follow manufacturer’s instructions.

Even the most advanced testing kit cannot be fool-proof. Due to the user interface and various other factors, including required reaction time before reading results. Drug users in search of how to get a false negative on a drug test often know. That producing the sample in a certain way such as urinating off most of the volume into the toilet before making the sample in the test cup can affect results.

The most unforgivable reason for having a false negative result on a forensic. Test is having used unreliable equipment and testing protocols. State-of-the-art drug testing designed to minimize the steps involved in processing samples. There by reducing the likelihood of errors or accidental contamination.

Rather than running urine samples through numerous tests, the prescribed method is to employ single-cup test kits that give reliable readings of several substances or drug families at the same time. The ultimate quality control in avoiding false positives and false negatives in drug tests is to purchase reputable CLIA-waived test kits from reliable suppliers like Ovus Medical.