What Does Bup Mean on a Drug Test? 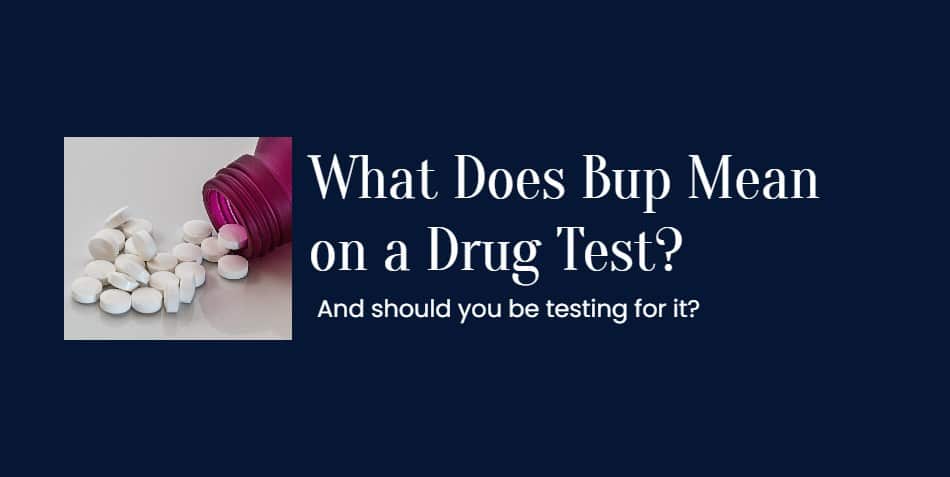 There are almost 21 million Americans who battle with at least one addiction, and of those, approximately 2.1 million have an Opioid addiction problem. At this time, buprenorphine/naloxone, methadone, and naltrexone are used to treat opioid use disorder, with buprenorphine being the most commonly prescribed.

So what does BUP mean on a drug test, and should you be testing for it? If you are considering testing employees or new job candidates, then this article is for you.

Buprenorphine (BUP) was initially intended to help treat people battling opioid addiction in a Medication Assisted Treatment (“MAT”) program. It is the primary ingredient in Bunavail, Subutex, Suboxone, and Zubsolv.

It’s a class 3 prescription drug that relieves the symptoms of heroin withdrawal which includes nausea, agitation, and insomnia. BUP can also be used to treat acute and chronic pain.

The benefit of buprenorphine is that it has a lower addiction rate than regular opioids, and it lasts in the system for about three days. There is also a lower risk of overdose than methadone. However, the side effects of buprenorphine include flu-like symptoms, sweating, headaches, insomnia, mood swings, and nausea.

In addition, buprenorphine can cause dangerously diminished breathing, primarily when combined with alcohol or other central nervous system depressants.

Unfortunately, it has become a common drug to buy off the streets for many reasons. First, it is much easier to acquire than heroin or other opiates, and secondly, it is inexpensive to buy due to its availability. In addition, BUP gives the user a euphoric high in low doses. Some people also use it as a temporary fix until their doctor can refill the legit prescription. 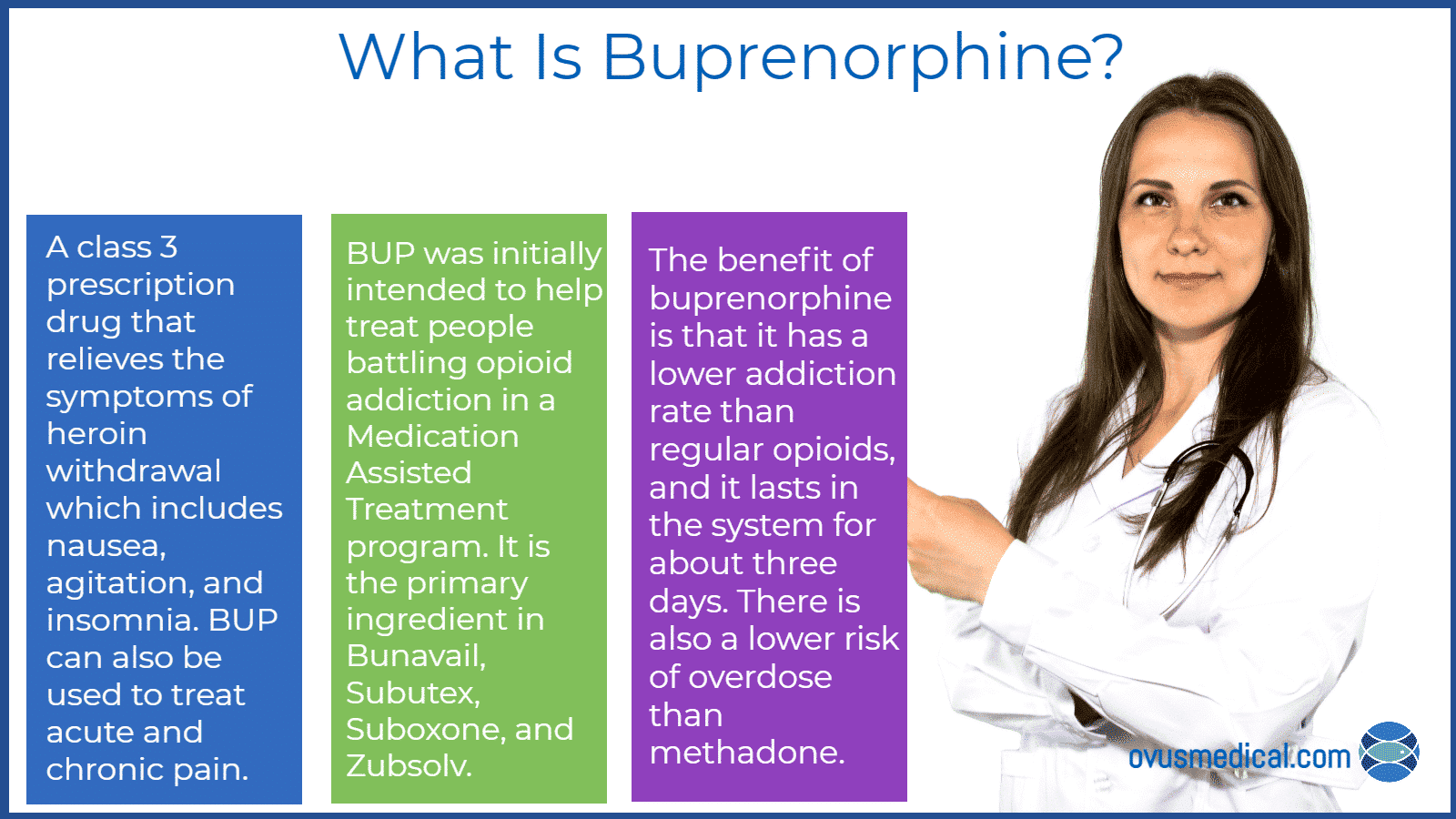 Why Test for Drugs?

A lot of companies are implementing a drug-free environment. As a result, testing your employees can achieve a few things.

First, the fact that an employee might get tested at any time will deter them from using drugs recreationally. Second, it also assists the company by removing the chance of hiring someone who is abusing drugs. And finally, if a test should come up positive with an employee, the company can then identify them early and assist the employee in getting treatment sooner.

Tests are also virtually immediate these days. For example, with a BUP urine drug test, you can get results in up to 8 minutes.

Does Buprenorphine Show Up on a Drug Test?

Despite being very similar in its effects to heroin, medications like Suboxone will not appear on a regular heroin test. Instead, they will need a test specifically for buprenorphine, which is the active ingredient.

Regular drug tests that do not state that they screen for buprenorphine will not test for the BUP drug.

How long does Buprenorphine stay in your system?

The effects of Buprenorphine last for 24 hours. Therefore, after one dose of buprenorphine, no trace of the drug would be expected to be found after 5 to 8 days in healthy people or 7 to 14 days in those with medical complications.

Why Do People Abuse Opioids?

Overdoses and deaths occur all too frequently from the misuse of opioids. In fact, about 130 Americans die every day from opioid overdoses. In addition, opioids can be sniffed, smoked, injected, or swallowed, making them even easier to abuse.

Opioids also cause euphoria and feelings of wellness, but also, in a controlled environment, they can reduce feelings of anxiety, aggression, and tension. However, despite the positive uses, they also contribute to drug dependency and abuse.

If you’re testing for BUP specifically, you will want to administer a BUP drug test. There are two straightforward ways to test for BUP: saliva and urine. In addition, you can buy bulk drug test strips if you know you’re going to test many people or perhaps one person many times.

Let’s have a look at some of the tests available out there:

This type of buprenorphine urine test comes in various sized kits, ranging from 6 panels to 16 panels. These most commonly screen for, but are not limited to:

The 8-16 panel test kits will also test for other substances such as alcohol, PCP, Fentanyl, Kratom, etc. You can purchase these tests in bulk or as individual strips.

The downside to these urine tests is that they need to be scheduled, and privacy is needed in a bathroom.

There is also a risk that the urine sample could be tampered with before accurate test results can be returned.

Saliva oral swabs are convenient and easy to use and detect recent usage or drugs in the system for 24-72 hours after use. These tests are usually come in 10-panel kits and will screen for the following:

These saliva swab tests can usually be bought individually or in bulk. Saliva tests are also very convenient as they eliminate the need for a bathroom and are much more difficult to fake.

Results from saliva administered tests can be assessed in under ten minutes.

What Does BUP Mean on a Drug Test?

Suppose your employee has tested positive for buprenorphine. In that case, that is a good indication that they are on a treatment program for opioid abuse and does not necessarily mean the employee is using BUP recreationally.

It’s not all bad though, coming up positive will also mean that your employee is taking their prescription medication correctly if they are in a Medication Assisted Treatment program.

We hope that this article has given you a better insight into how BUP drug tests work. Now that we’ve covered everything about buprenorphine, you shouldn’t have to ask yourself, “what does BUP mean on a drug test?” anymore.

Buprenorphine drug tests are a great way to ensure your employees aren’t abusing drugs. If you need assistance getting drug testing kits, contact us, and we’ll help you find the right ones for your business. Bulk quantities available.