Drug Tests and Their Detection Times 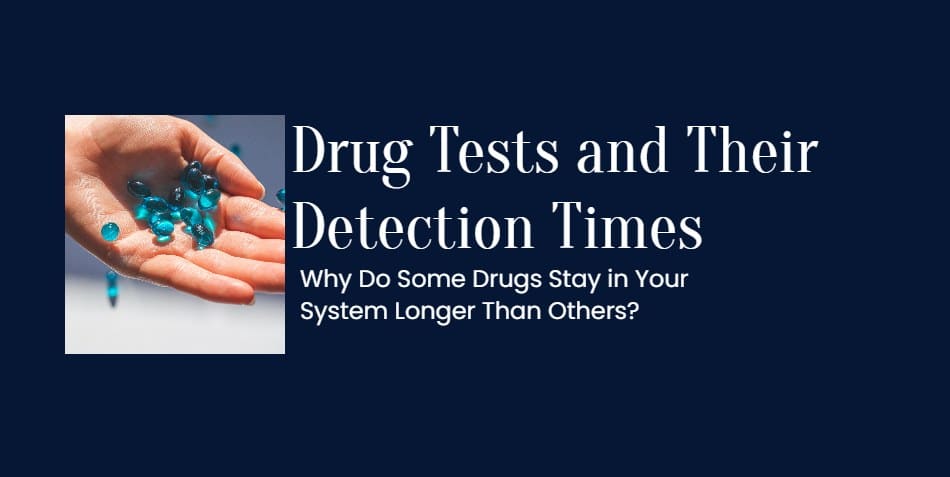 Drug tests are commonplace today. Many employers, court systems, athletic leagues/organizations, or even medical insurance companies may require people to take drug tests. There are, however, different types of drug tests designed to check for different illicit drugs or narcotics. Some tests are more sensitive than others and can detect the presence of a certain type of drug for a longer period of time. Certain drugs remain detectable in the body for months, while others may only be detectable for days. Here, we’ll explore different drug test detection times for various types of drugs and test types.

Why Do Some Drugs Stay in Your System Longer Than Others?

There are different reasons why some drugs stay in the system for a longer period of time than others. The main factor determining this time frame is the type of drug in question. Typically, drugs that are smoked leave the body more quickly than drugs that are ingested. Other key factors that affect the length of time a drug will remain in the body include:

There isn’t any way to predict with certainty how long a drug will stay in the body. Even considering average times that drugs are typically eliminated from people using them, there’s no way for an individual to know if the drug they’re using will be eliminated quickly or slowly at any given time. The times that drugs remain in the system are highly variable–and the tests used to detect them also vary.

What Are the Different Types of Drug Tests?

There are many different kinds of drug tests today. These tests include urine, blood, hair, saliva, and perspiration. The goal of the drug testing may inform which type of test is chosen.

Urine tests are the most commonplace because they are affordable, easy to administer and take, and produce fast results. In most cases, urine will detect a drug’s presence if it was used in the last few days, but as with all tests, urine drug test times vary according to many different factors.

Drug testing using hair is extremely effective and accurate. A hair test can generally determine if a person has used most types of drugs for up to 90 days, and in some cases, even longer. Hair follicle testing, however, tends to be substantially more expensive than other drug tests and has a long turn-around time as it must be sent to a laboratory.

A mouth swab test or saliva test can detect the presence of cannabis, opioids, and other substances. Saliva drug test detection times vary depending on the factors we discussed above. Some agencies prefer saliva tests to urine tests because they’re easier to administer and there is less risk for cheating on the test. And some law enforcement groups prefer swab tests for roadside administration over other types of drug testing.

Perspiration or sweat patch drug testing is most frequently used in drug-associated court cases. This type of testing is used for continuous monitoring for a period of time such as 14 days. The tests are accurate and cannot be ‘diluted’. They are also very secure. Testing staff can detect if the patch has been tampered with and will note the results as such with an automatic refusal. Once the testing has been completed, these tests usually return results in less than three days.

While other tests look for drug metabolites, blood drug tests look for parent compounds of drugs. Blood tests offer only a short window of time for testing. In fact, blood tests can only test for compounds within minutes to hours of their use. These tests are commonly used at accident sites to determine if individuals were driving or operating equipment while under the influence of alcohol or drugs. Although drug testing involves a short window of time, the tests are very accurate. 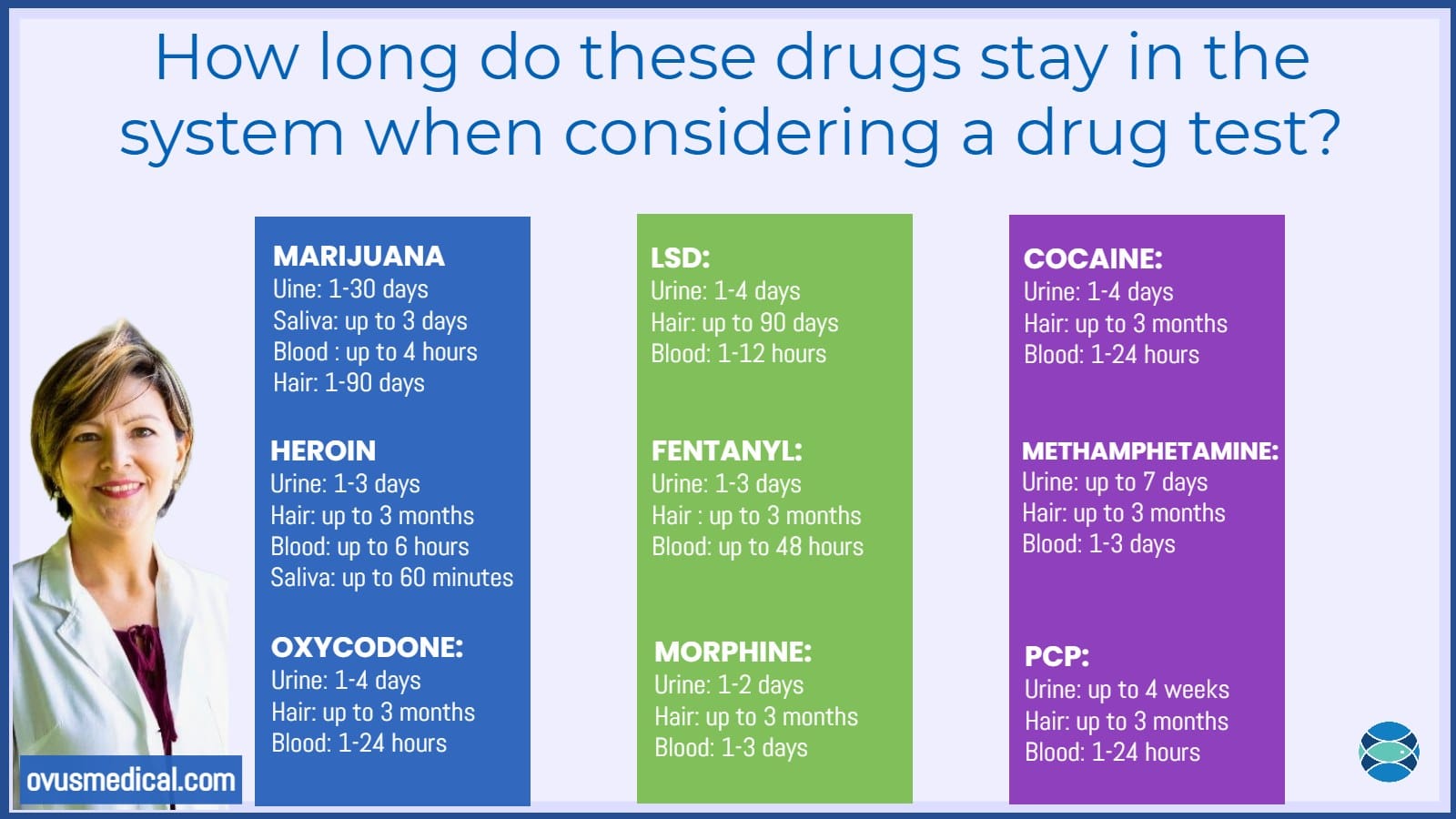 Other Types of Drug Tests

Today, there are many different types of drug tests available for employers, medical organizations, or other agencies who have drug testing requirements. For instance, you may see products such as 12 panel drug tests or 10 panel drug tests. These tests typically involve urine testing and contain all the items needed to conduct the test in kit form. They test for 10 or 12 components in order to determine the presence of drugs such as marijuana, barbiturates, cocaine, opioids, etc…

Here, we’ll outline some of the most commonly abused drugs and how long they’re likely to remain in the body. We’ll also provide some ranges for drug testing times, which again, will vary depending on the drug and the test.

Millions of Americans use marijuana, some medicinally and many recreationally. Although marijuana is legal in many places today, it is still not legal in all states. Moreover, many employers still prohibit its use and will test employees to ensure that they are not using the drug.

The testing time frame for marijuana is dependent on the factors we discussed above. The following times are merely a guide for drug testing times:

Heroin is an illicit drug that is not legal for use in any states and has no medicinal value. It is synthesized from the drug morphine and is highly addictive and dangerous. In 2019, more than 14,000 people died from a drug overdose involving heroin. Many agencies or employers routinely test for heroin use. Heroin drug testing times are as follows:

Drug Testing for Other Opioids

Heroin isn’t the only opioid drug of abuse. Many people abuse prescription narcotics, which are drugs like fentanyl, morphine, or codeine. These drugs can leave an individual drowsy and with reduced functions. Driving or operating equipment when under the influence of these drugs can be extremely dangerous. Moreover, people who abuse these opioids may be less than productive in the workplace.

There are many opioids; we’ll include some drug testing times for the most common opioid drugs of abuse.

Hallucinogenic drugs cause people to see or hear things that are not real. Some hallucinogens are found naturally in items like mushrooms. Others are made from chemicals. Also referred to as psychedelic drugs, these chemicals change a person’s perception of reality. Drug testing times for these drugs vary depending on the hallucinogen in question; here are a few of the most common hallucinogen testing times:

Stimulants like cocaine and methamphetamine are illegal but commonly abused drugs. These drugs involve both dangerous short and long-term effects. Like the other classes of drugs, each type of stimulant may involve different average time frames for testing to determine their presence in the body. Some of the most commonly abused stimulants and their drug testing times are:

Drug tests can also test for the presence of drugs like barbiturates or other commonly abused drugs like Ecstasy, which is chemically similar to both stimulants and hallucinogenic drugs. Drug tests may also test for alcohol. When selecting a drug test for use, courts and employers will factor in these drug test time frames to their decisions. Other factors like the tests’ cost and accuracy are also typically considered.