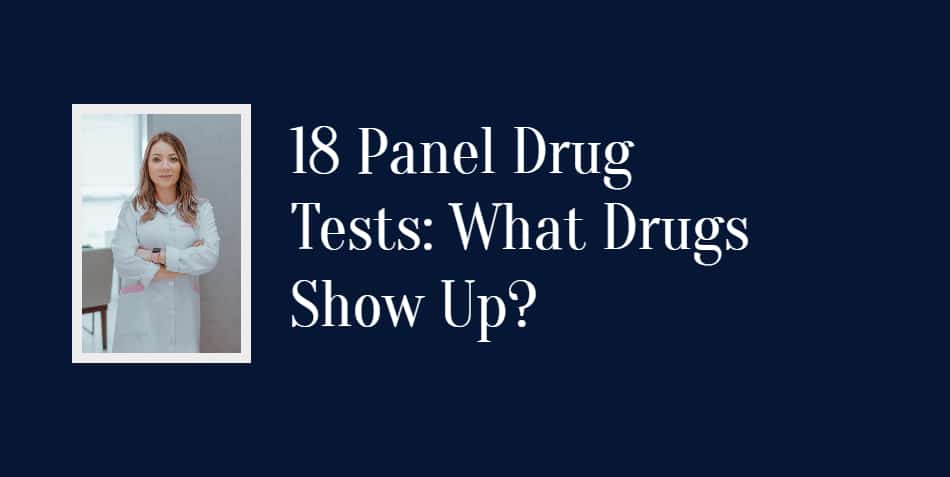 What are 18 Panel Drug Tests?

18 panel drug tests are one of the most comprehensive drug screens today. Instead of detecting a limited number of illicit substances, these drug tests look for 18 different drugs in one go. The results are also simple to read and do not require you to open the cup of urine, making it more convenient and sanitary.

These tests also include built-in temperature strips to ensure that the urine sample is at the proper temperature for bodily fluids. This way, nobody can tamper a test with synthetic urine or any other fraudulent substance.

These tests are also leak-proof and have non-drip screw tops. Because drug detection tools such as the 18 Panel test are in high demand, purchasing drug tests in bulk is also an option. This way, customers can obtain the most product at the best price.

The question is – what illicit substances show up in 18 panel drug tests? Read on to find out.

18 Panel Drug Tests: Which Illegal Substances Can They Detect?

Amphetamine is a widely used illegal drug that overstimulates the central nervous system, causing users to feel unusually alert, energetic, and productive. Stimulants such as amphetamine and methamphetamine can also cause euphoria, agitation, delusions, and hallucinations. Abusing these drugs can also lead to serious health issues like stroke, heart disease, convulsions, and severe tooth decay.

Opiates are controlled prescription substances derived from Opium, a chemical found naturally in poppy seeds and plants. Doctors prescribe these for treating mild to severe pain in patients. Opioids have extremely high rates of abuse due to their intensely calming effects, leading to addiction in many cases.

This stimulant affects the central nervous system. Meth is a white, odorless, bitter-tasting crystalline powder that dissolves easily in water or alcohol. The US Drug Enforcement Administration has classified it as a Schedule II stimulant, making it legally available only through a nonrefillable prescription. It is medically indicated for the treatment of attention deficit hyperactivity disorder (ADHD) and as a short-term component of weight-loss treatments, but these uses are limited. Doctors rarely prescribe it. But when they do, the recommended doses are far lower than those commonly misused and abused.

Benzodiazepines affect the central nervous system, causing sedation and muscle relaxation and lowering anxiety levels. Unfortunately, they have also been used as a “date rape” drug because they can significantly impair, if not eliminate, functions that normally allow a person to resist or even want to resist sexual aggression or assault.

Cocaine is a highly addictive stimulant. Therefore, this Schedule II drug has a high abuse potential, but doctors can prescribe it for legitimate medical purposes.

Methadone alters how your brain and nervous system respond to pain, causing you to feel better. It acts slower than other strong analgesics such as morphine. If you are in a lot of pain due to an injury, surgery, or a long-term illness, your doctor may prescribe methadone. It also prevents the high caused by codeine, heroin, hydrocodone, morphine, and oxycodone. In replacement therapy, it can provide a similar sensation while preventing withdrawal symptoms and cravings.

Oxycodone is a semisynthetic but moderately potent, orally available opioid. It is widely used for acute or chronic pain management, either alone or with acetaminophen. However, combining oxycodone and acetaminophen has been linked to numerous cases of acute liver failure caused by an unintentional overdose.

Medication-assisted treatment (MAT) programs use Buprenorphine to help people reduce or quit using heroin or other opiates, such as pain relievers like morphine. The Food and Drug Administration (FDA) approved it for clinical use in October 2002 for the recent advancement in medication-assisted treatment (MAT). Medications such as buprenorphine, when combined with counseling and behavioral therapies, offer a comprehensive approach to treating opioid addiction. Buprenorphine is both safe and effective when taken as prescribed.

MDMA is an illegal drug that acts as a stimulant and a psychedelic, which makes a person feel energized but at the same time distorts his perception of time and enhanced enjoyment from tactile experiences. It goes by the street names Ecstasy and Molly. Its primary effects in the brain are on neurons that communicate with other neurons via the chemicals serotonin, dopamine, and norepinephrine.

THC, or tetrahydrocannabinol, is the chemical in marijuana that causes most of its psychological effects. It functions similarly to the cannabinoid chemicals produced naturally by the body.
THC causes euphoria by stimulating brain cells to release dopamine. However, it also interferes in processing information in the hippocampus, the part of the brain responsible for memory formation.

PCP belongs to the hallucinogen drug class. These hallucinogens distort the things that you see, hear, or feel while awake. Events seem real but turn out to be figments of the imagination. PCP users can become psychologically addicted to it. This indicates that their mind is dependent on PCP. They cannot control their use, and they rely on PCP to function in daily life.

Fentanyl is a highly potent synthetic opioid similar to morphine but 50 to 100 times stronger. This prescription drug is also illegally manufactured and used. It is a pain reliever that, like morphine, is commonly used to treat patients in excruciating pain, particularly after surgery. It is also used to treat chronic pain patients who are physically tolerant to other opioids. Fentanyl is one of the most commonly used drugs in overdose deaths in the United States.

EtG or ethyl glucuronide is a byproduct of ethanol (drinkable alcohol) and glucuronide. Urine drug tests with EtG can detect this metabolite in urine much longer than alcohol tests that use saliva or blood. EtG is detectable in urine for up to 48 hours after a few drinks and sometimes for up to 72 hours or longer if the drinking is heavy.

Tricyclic antidepressants (TCAs) are a type of antidepressant medication with a similar chemical structure and biological effects to other antidepressants. Scientists believe that patients suffering from depression may have an imbalance in neurotransmitters, chemicals produced by nerves and used to communicate with other nerves. These substances increase norepinephrine and serotonin levels while blocking the action of acetylcholine, another neurotransmitter. Additionally, TCA can relieve depression, cause sedation and partially block the effects of histamine.