How Long Does a Drug Test Take? 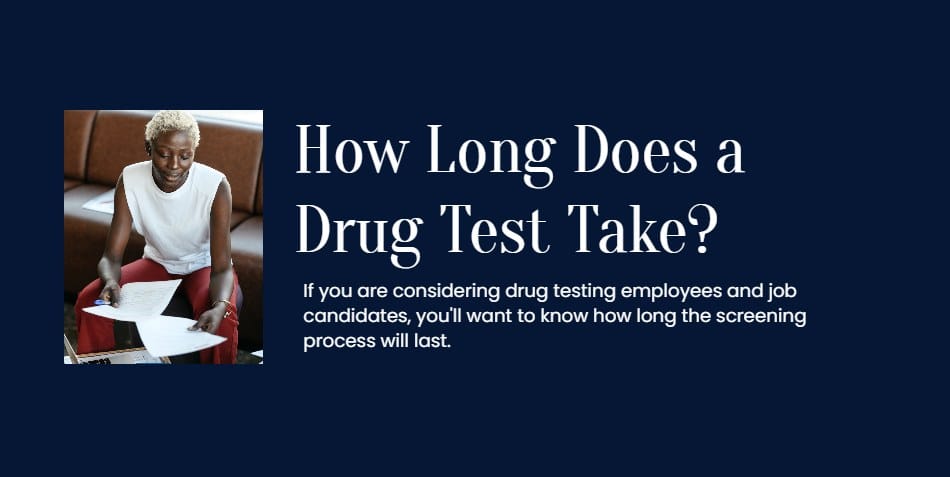 How long does a drug test take? If you are considering drug testing employees and job candidates, you’ll want to know how long the screening process will last.

Although drug testing of job candidates is on the decline in states like California, pre-employment drug screenings remain a useful resource for many U.S. companies looking to reduce workplace drug use.

For companies that require workers to use heavy machinery or exhibit constant focus and concentration, drug screenings can significantly reduce the risk of accidents and injuries in the workplace.

This article breaks down the processes, timelines, and efficacy of the most common types of workplace drug screening methods.

How Long Does a Drug Test Take: Factors Involved

A few different factors can influence the length of time it takes to get the results of a drug screening. Results can be instantaneous or take up to a week.

How long it takes to get the results of a drug test depends on the type of drug screening used and which drugs you are screening for. Other factors include which lab you use and whether the results are positive or negative.

A urine drug test is a type of drug screening. It analyzes urine for traces of specific illegal substances and prescription medications.

The types of drugs a urine test can screen for include cannabis, cocaine, amphetamines, methamphetamines, benzodiazepines, barbiturates, PCP, opioids, and methadone.

The first type of urine drug screening is called an immunoassay. The limitations of the immunoassay include an inability to detect all opioids. It is also possible to get a false positive with an immunoassay.

When an immunoassay test returns a positive result, employers require a follow-up test. The follow-up test is called a gas chromatography/mass spectrometry test, or GC/MS.

A GC/MS test is more expensive, but it rarely results in a false positive. Thus, it is an excellent method for confirming the positive results of an immunoassay.

The downside to both types of urine drug tests is that they can result in a false negative. It is also difficult for both tests to detect same-day drug use.

How Long Does a Urine Drug Test Take?

In some cases, it is possible to get instant drug test results for urine tests. A lab-based urine drug test can take up to a few days to produce results.

A saliva drug test is a method of drug screening that involves swabbing the inside of the mouth. Among employers, they are becoming a popular alternative to urine drug tests.

Saliva drug tests are easier to administer than urine tests, and more difficult to tamper with. They can detect cannabis, alcohol, amphetamines, methamphetamines, benzodiazepines, barbiturates, opioids, and PCP.

In addition, saliva drug tests are much less invasive than any other type of drug screening test. The test is performed by using oral swabs to take a saliva sample from the inside of the cheek.

How Long Does a Saliva Drug Test Take?

How long does it take for a saliva drug test to produce test results? Well, the results of a negative saliva drug screening are typically available within 24 hours once the lab gets the results.

If the results of the saliva test are positive, a confirmation test will require an additional 72 hours to produce results. When performed correctly, saliva drug tests are 97 percent accurate.

Multi-drug test panels can be done in a variety of ways. It is possible to get anything from a three-panel test to a 12-panel test.

A false negative is what happens when a specimen receives a negative test result despite the occurrence of drug use.

However, when a drug test receives a false negative, it is unlikely that an employer will use a confirmation test unless they have reason to suspect the employee of using drugs either habitually or recreationally.

Where To Buy Drug Tests in Bulk

How long does a drug test take? The answer depends on what kind of drug test you are using. A urine drug test result can take between 24 and 72 hours.