Most Common Drugs of Abuse in America 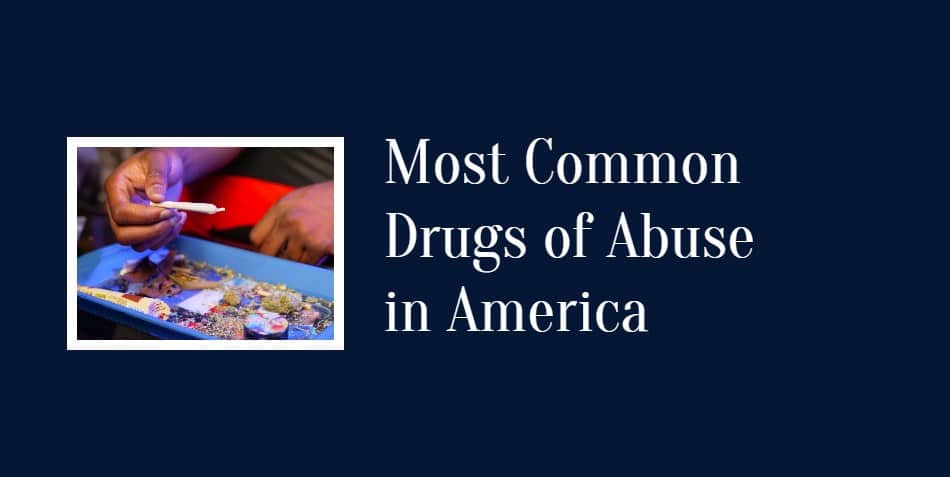 Drug abuse is a problem of great concern to the American people. Mostly because of its negative impact on society, productivity, public safety, and even law and order. The law-enforcement community is knowledgeable about the most common drugs of abuse. However, it is valuable for all Americans to be aware of what these are. It is necessary so they can contribute to efforts to address the problem. 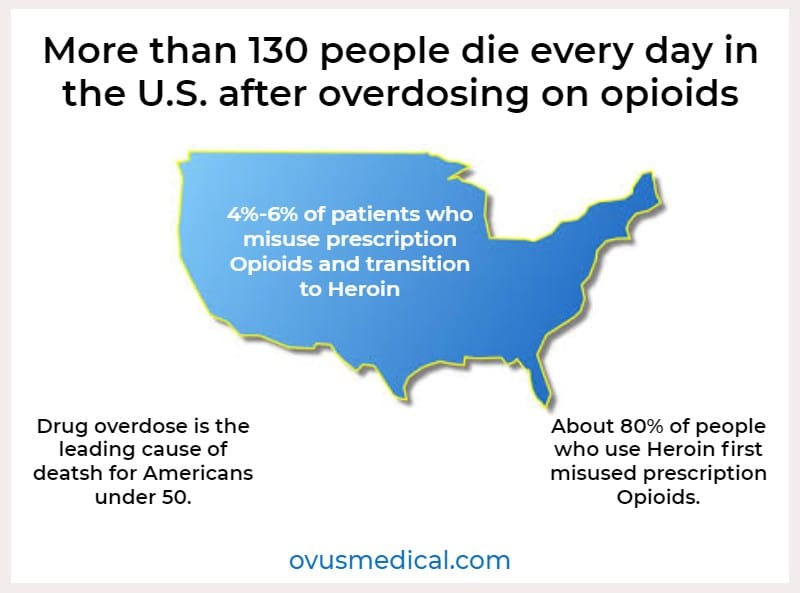 Below are the top ten most common drugs of abuse in the United States.

10 of the Most Common Drugs of Abuse

These often referred to as “speed” or even “uppers” because they are stimulant drugs that accelerate body and brain functions. This drug category includes many products legally manufactured and distributed by the pharma industry. They are used to treat conditions like attention deficit hyperactivity disorder (ADHD) and narcolepsy or uncontrollable sleepiness, and even Parkinson’s disease. Amphetamines are sometimes abused by patients who have been prescribed the medication. However, they are often abused by people acquiring drugs illicitly or by people who buy illegally manufactured drugs on the street.

Barbiturates do the opposite of amphetamines as they depress or slow down body and brain activity. These pharmaceutical products are legally prescribed or used to treat headaches, seizures, and insomnia. They are considered common drugs of abuse because they’re popular for their sedative and even hypnotic effects. They purportedly help users “get away from it all” in the same way alcoholic drinks do. Often referred to as “downers,” these drugs are particularly dangerous because even a mild overdose could result in coma or even death.

Benzodiazepines are also legitimate pharmaceutical products that are prescribed by physicians for specific indications. They are used to treat issues like sleep disorder, muscle spasms, seizures, and anxiety. They are also used as sedatives in surgical procedures. Among the benzodiazepines of great concern due to its extremely widespread use and abuse is diazepam, commonly known as valium, being the little pill referred to as “Mother’s little helper” Rolling Stones’ hit song.

Cocaine is a naturally-occurring substance derived from the leaves of the indigenous South American coca shrub. Andean cultures are believed to have cultivated the drug as early as 1000 BC for ritual use and the drug’s energizing effect. It stimulates the nervous system and is also a local anesthetic. Drug enforcement operatives wage a relentless war against the production and traffic of cocaine originating from South America. 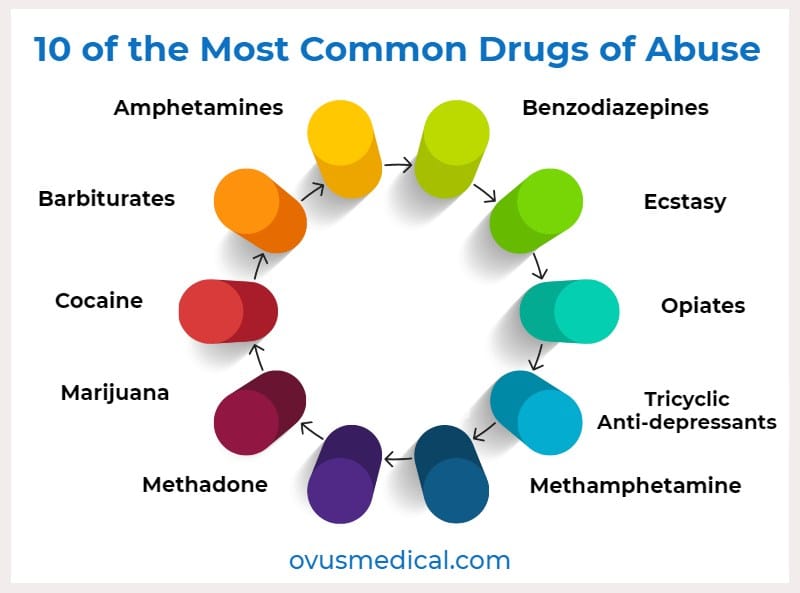 Marijuana is also a naturally-occurring plant. With selective breeding, many modern cultivars for both medical and recreational use have developed. The drug and various derivatives of it have become legalized in various circumstances in some states. Even so, marijuana’s identified as one of the common drugs of abuse and is still on the Drug Enforcement Agency’s watchlist as its cultivation and use is widespread.

Methadone is a synthetic drug used against pain and in the treatment of opiate drug abuse, particularly for strong opium derivatives like morphine and heroin. It has valuable medical uses in the detoxification and withdrawal of addictive drugs. However, it is also widely abused because it is possible to develop an addiction to the drug itself.

Methamphetamine is a synthetic drug with some medical use, but is largely a recreational drug, especially in Asia and the United States. It is a highly addictive substance that produces a similar effect to amphetamines, although much stronger. Methamphetamine effects can vary and be very dangerous.

Methylenedioxymethamphetamine, known on the street as “ecstasy,” is a synthetic drug originally used to treat obesity. It’s abused as a recreational or rave party drug as it alters perception, heightens sensations, and elicits pleasure. Abuse of this designer substance can fatal, especially when street versions of the drug are adulterated with other drugs.

Opiates are pain-relief drugs traditionally derived from opium, an extract of the poppy plant. The term has slightly evolved and now refers to any drug that binds to opioid receptors. As they generally valuable medications, their manufacture, distribution, and use closely monitored by the government to prevent abuse.

Tricyclic Anti-depressants are drugs intended for treating disorders such as clinical depression and even Attention Deficit Hyperactive Disorder. Overdoing the usage of these drugs is potentially fatal. With the development of newer generation anti-depressants, the misuse and abuse of these drugs are becoming less of a problem.

As making actual “drug busts” is not always a practicable approach to addressing the problem of drug abuse in America, it is valuable to equip institutions with the means of detecting the presence of these common drugs of abuse. People often need to be evaluated for employment, school admission, military deployment, or any other circumstance in which substance abuse is a serious issue.

Current technology makes it possible to detect the most common drugs of abuse through a quick and easy urine test. Check out the Ovus Medical blog to know more about the handy and accurate Single Cup tests to detect all ten of these drugs in one urine sample.

Click Here To Learn The 12 Most Commonly Abused Drugs