What is a Ten Panel Urine Drug Test: Things You Need to Know 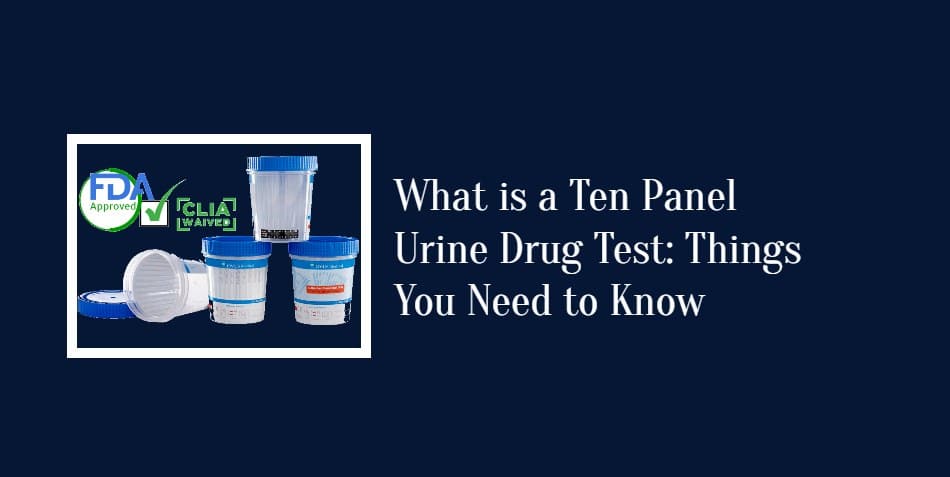 The problem of drug abuse has become so widespread in the United States that the need to check personnel for illegal substance use is no longer limited to specific sectors and industries. The profile of the potential drug user now encompasses a much wider demographic. Than ever before, that even prospective employees in respected fields often need to tested.

With such a demand, it is no longer practical to send test subjects to specialized laboratories. For careful screening under strict conditions. Neither is it sufficient to test samples for the presence of only one or two illegal substances since the number of commonly abused drugs has multiplied.

To meet the needs of agencies that have to ensure their personnel is drug-free, the healthcare industry has developed single-cup urine testing kits that enable accurate and reliable onsite testing for several drugs from just one sample. One such testing kit, known as a ten panel urine drug test contained in a single cup. Which can provide reliable results in just a few minutes, there by providing human resource managers with quick. Valuable information about personnel or even potential employees.

Ten panel urine drug test: What is it for?

The ten panel urine drug test kit allows users or operators to detect the presence of the most common drugs or drug families that are abused or misused in the United States. The test is sensitive to the presence of Amphetamine, Barbiturates, Benzodiazepines, Buprenorphine, Cocaine, Opiates/Morphine, Ecstasy/MDMA, Marijuana, Methadone, Oxycodone, Methamphetamine. In situations wherein the detected substance is outright illegal. As in the case of recreational drugs like methamphetamine or ecstasy/MDMA, law-enforcers. Use this easy one-cup test kit to acquire valuable forensic evidence against drug offenders for legal purposes. Probation officers also use these handy kits for mandatory drug tests of their subjects. Since the test can administered almost anywhere.

In instances where the drug monitored is not considered illegal. If it has therapeutic indications under the correct circumstances.  A drug test often still indicated to make sure the person is not under the influence of a substance. That could adversely affect work performance, behavior, and even the person’s health.

Personnel who engaged in critical or potentially hazardous work tasks. Such as those handling sensitive equipment including vehicles and aircraft, personnel working in sensitive positions that require alertness and discretion. Even those working in construction or industrial sites should ideally be free from any substance. That could impair their faculties and compromise safety and productivity. In fact, recent statistics indicate that up to twenty percent of Americans. Who die from work-related accidents found to positive for substance abuse upon postmortem examination.

The Occupational Health and Safety Organization notes that. While mining and construction sites the most hazardous workplaces, the workers at these places also known to have the highest rates of drug abuse among workers in all occupations. It has become standard practice for project managers at such worksites to order drug screening for all personnel considered to work on their teams. The ten panel urine drug test is the most rational approach for this type of screening. Because it can done quickly and easily onsite.

There are organizations that legally permitted to do mandatory drug tests on their job applicants, especially. When the overall nature of their employment is of a highly sensitive nature such as national security and public safety.

How does it work?

While some other bodily fluids can also be tested to detect if the subject is a drug abuser, urine tests are the most practical because they are not invasive, require no special equipment, and can be done anywhere and anytime. All that needed is a bit of privacy and a means of verifying the sample is not adulterated and that. It was taken from the right person. The reliability of the sample usually ensured by designating a watcher of the same gender.

The operator conducting the test makes sure the cup is at room temperature. Which is between 59 and 78 degrees Fahrenheit (25.56 °C). After removing the cup from its protective packaging, the operator sees to. That the test subject writes his or her name in the space provided on the test cup and initials it. The test subject then urinates into the cup, making sure that there is at least 15 ml of urine before sealing the cup. The operator makes sure that the cup sealed and not leaking, then starts a five minute timer.

After the prescribed five-minute period, the results appear on each of the ten panels on the outside surface of the drug test cup. Each panel indicates the presence or absence of one particular substance tested. The operator only needs to examine each panel to check whether a colored band appears.

The presence of a colored band indicates an all clear of the test urine for the drug corresponding to that panel. Failure of a colored band to appear is indicative of the presence of the drug in the urine sample. When such a result produced, the operator can choose to have the sample sent to a properly equipped laboratory for confirm. These results should noted immediately because waiting too long — such as over 8 minutes — would show the test. Exposure to light and air also alters test results.

Is the test reliable?

The Ovus Medical ten panel urine drug test kit is FDA-certified and has become the industry choice due to its reliability, cost-effectiveness, and ease of use. The sensitivity of the tests complies with the cut-off concentrations set by the Substance Abuse. Mental Health Administration guidelines, thereby ensuring the perfection of each assay.

Accuracy of these tests also assured by proper handling of the cup and urine sample and by strict adherence to procedures. Which includes monitoring the temperature of the test cups to ensure a zero margin of error. A properly conducted test with this cutting edge kit provides concerned agencies with valuable, depend, and quickly available information. That helps protect their establishments, their personnel, and the test subjects themselves from the dangers of substance abuse and misuse.